A Kansas officer fired at a dog inside a home, and a bullet fragment hit the little girl just behind the animal

WICHITA, Kan. – The Sedgwick County District Attorney Thursday released body cam footage to the Wichita Eagle, showing a now-former Wichita police officer firing at family dog and injuring a child, reports CBS affiliate KWCH. Police said officer Dexter Betts was responding to a domestic dispute and suicidal call on Dec. 30, 2017, when he fired two shots at a dog he reportedly believed was charging at him.

According to the Wichita Eagle, the dog was a 35-to-40-pound English bull terrier.

Betts missed the dog, but a bullet fragment ricocheted and struck a girl sitting right behind the animal in the forehead, just above her right eye. The Eagle reports that fragments of the bullets also hit the dog.

In the video, an officer can be heard saying, “We got a dog inside here, too,” with a slight laugh, just a moment before Betts opens fire in the living room where, according to the Wichita Eagle, there were four children.

The girl who was struck was treated at a local hospital and released. 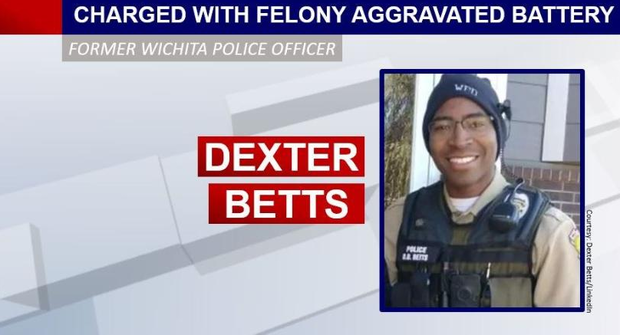 Betts entered a not guilty plea in the case. His trial is set for Aug. 20.