The picture of a Honduran girl crying as she and her mother are detained in Texas has grabbed worldwide attention and come to symbolize the intense debate about separating children from their parents. Time magazine put the young girl on this week’s cover, but the Border Patrol agent involved in the dramatic scene says the photo might be a little misleading. That agent said the mother and daughter were never separated and are still together.

“We were patrolling the border. It was after 10 o’clock at night,” Border Patrol agent Carlos Ruiz told CBS News’ David Begnaud. He was the first to encounter Sandra Sanchez and her daughter after they allegedly crossed the Rio Grande River into Texas illegally.

“We asked her to set the kid down in front of her, not away from her, she was right in front of her…So we can properly search the mother,” Ruiz said. “So the kid immediately started crying as she set her down. I personally went up to the mother and asked her ‘Are you doing OK? Is the kid OK?’ and she said, ‘Yes. She’s tired and thirsty. It’s 11 o’clock at night.'”

A 2-year-old Honduran asylum-seeker cries as her mother is searched and detained near the U.S.-Mexico border on June 12, 2018, in McAllen, Texas.

Getty photographer John Moore joined Ruiz for a nearly nine-hour ride along on the border. He was just feet away from Sanchez and her daughter. 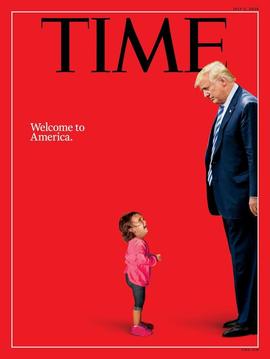 “When I took this picture, I knew it would be important. I had no way of knowing that it would touch people quite on the level that it has,” Moore said. “I asked her how long she’d been traveling, and she gave me this very weary look, and she said she’d been on the road with her daughter for a month…. Imagine doing that with children. It’s almost impossible to imagine, actually.”

Moore’s image is now on the cover of Time magazine next to a picture of President Trump.

“They’re using it to symbolize a policy and that was not the case in this picture,” Ruiz said. “It took less than two minutes. As soon as the search was finished, she immediately picked the girl up, and the girl immediately stopped crying.”

Moore says Ruiz and other agents acted professionally that night. But he is happy with the cover and the response to the image.

Ruiz said he and his fellow agents represent more than just the Border Patrol logo.

The photo has reached the young girl’s father in Honduras. He told Univision it broke his heart and that he hoped his wife and daughter’s rights were respected.