Car pulled from Officers Lake identified as stolen in 2010

LOWNDES COUNTY, Miss. (WCBI) – A car was found submerged in a well-known Lowndes County lake while deputies were investigating another crime. 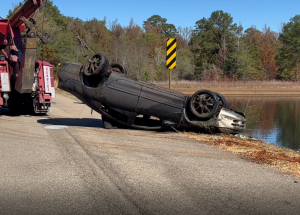 The Dodge Intrepid was pulled from Officers Lake, next to Profitt’s Porch, just before noon today.

Sheriff Eddie Hawkins said the license plate from the car tells investigators the vehicle was reported stolen in 2010 from a local body shop.

It’s unclear how the car ended upside down in the lake or who drove it there.

Deputies believe the car could have been underwater for years.

“We don’t feel like this is linked to any other investigation that we are conducting. We did not find any remains of anyone in the vehicle, at this point. We will get a search warrant and conduct an investigation of the vehicle itself,” said Lowndes County Sheriff Eddie Hawkins.

Hawkins declined to say what deputies were initially investigating before finding the car.