Chasing the Weather with Isaac and Mississippi State University

The day began in far eastern Wisconsin in Oshkosh. The plan was to travel up and around Lake Michigan to position into northern Lower Michigan for a potential severe weather & tornado threat in the afternoon.

Storms indeed formed and intensified over Lake Michigan through lunch and then raced into northern Lower Michigan by 2-3p. Favorable shear and instability were in place, and one storm was able to access that and became a mature, long-tracked supercell storm that tracked from west of Gaylord, through Gaylord, and then up to Presque Isle. 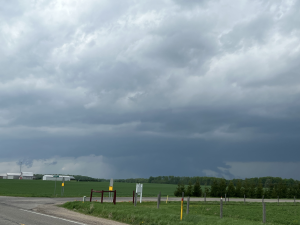 This storm went on to produce a tornado that tracked through the city of Gaylord. NWS surveys continue, and the rating will be determined at a later date. I will write more about this day in coming days.

The day begin in Sioux City, Iowa, with an area in southeastern Minnesota being the target for possible severe weather and tornadoes. The environment was characterized by lots of favorable wind shear that was confirmed from our balloon launch from Albert Lea, MN, shortly after 2p. It also showed an inversion, or a layer of warm air just off the ground. This prevents surface air parcels from rising. 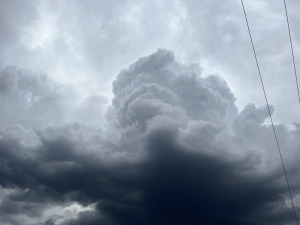 Because of this, storms were “elevated” above the surface and in an environment not conducive for major tornado development. Wind and hail were common in the storms across southern MN, however. We observed a ragged wall cloud that exhibited some rotation and had scud clouds, but because the storm was still elevated, tornado development was unlikely. 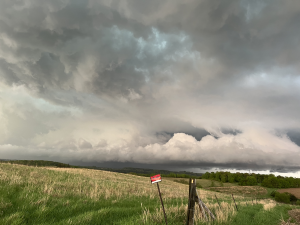 Another “down” day with more sightseeing and teaching! We left Lincoln, Nebraska, Wednesday. morning and headed up the town of Royal, Nebraska. This is where Ashfall Fossil Beds State Historical Park is located. 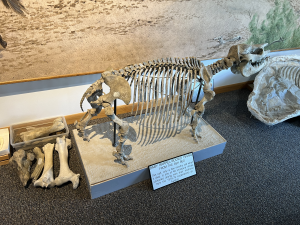 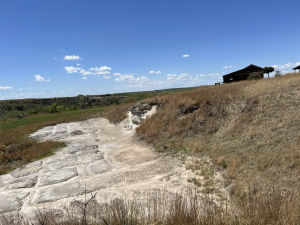 High-based convection (storms) attempted to form along a front in northern Nebraska, but unfavorable energy for the storms prevented any meaningful strengthening. However, the forecast for the Upper Midwest looks more active with severe weather chances higher. 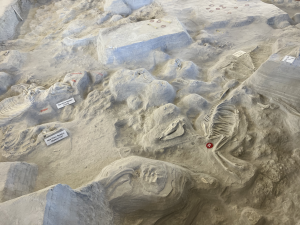 Therefore, the plan for Thursday is to head into southern Minnesota to wait for storms to fire. Stay tuned for more!

The day began in Salina, Kansas, before we headed northeast toward east-central Nebraska. We were thinking the approach of a cold front from the north would spark thunderstorms early that we could see. However, morning storms lingered longer than anticipated, and the atmosphere was not able to recover in that area to support storm formation.

We stopped for lunch in Stromsburg, Nebraska while we waited on potential storm development. Once storms began forming ahead of a dryline in southwestern Nebraska and northwestern Kansas, we decided to head west and southwest toward those storms. While the instability was favorable, storms quickly coalesced into a slow-moving, propagating cluster of storms in southwestern Nebraska. Eventually, storms became outflow dominant and weakened, thereby limiting any potential for hail or a tornado. We felt some breezy, cooler outflow winds as we approached the storms from the east. The storm structure had become less impressive, but we still captured some pictures below: 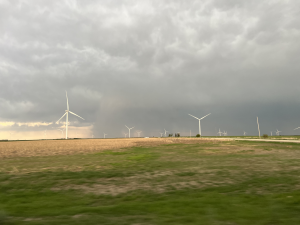 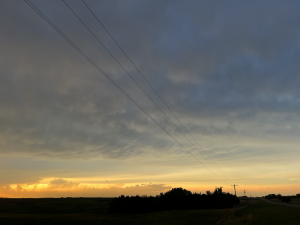 We began the day in Okmulgee, Oklahoma, after our Sunday chase. The day brought us into Oklahoma City and then through southern Kansas to our stopping point of Salina, Kansas. We had beautiful, sunny weather the entire drive, and we got a chance to tour the OKC bombing memorial in downtown Oklahoma City – a somber experience.

Tuesday brings the threat of severe weather back to the central Plains states. We continue to analyze model data to attempt to pinpoint the “best” place to be for potential severe weather during the day Tuesday, so stay tuned!

Saturday, the team and I drove from Starkville, MS, to Forth Smith, Arkansas to prepare for Sunday’s possible severe weather risk in parts of Oklahoma and Missouri. It looked like there might be two zones of severe weather – one in southwestern Missouri near Joplin and another in eastern Oklahoma.

Sunday morning, we headed toward southwest Missouri, Joplin specifically, as storms in eastern Kansas were surging southeast. It became apparent those storms were going to continue pushing into Arkansas, so we decided to get on I-44 and head southwest into Oklahoma around midday. This was in advance of potential storm development later in the day. Before we left, we captured a picturesque shelf cloud from storms approaching Joplin from the northwest. 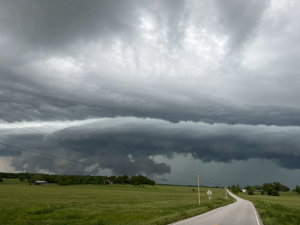 Once into Oklahoma, the air was extremely unstable ahead of a conectively-enforced outflow boundary sinking south to southwest across eastern Oklahoma. This feature acted as a mini “cold front” and initiated storms shortly after 4p. We positioned ourselves south of the storm to get the best view, and this is pictured below. 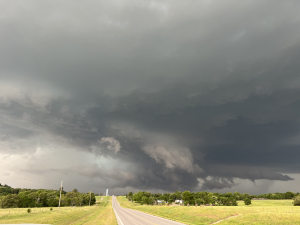 Due to weak low level wind shear, no tornado development occurred. However, there were reports of very large hail and damaging wind gusts. Thankfully, we incurred no damage from hail or wind in our location near Calvin, OK.

Monday will be a travel day into Kansas to position for potential storms Tuesday. Stay tuned for more!