Chickasaw County’s interim coroner views his job as a ministry

Larry Harris had served as deputy coroner the past six years

HOUSTON, Miss. (WCBI) – The interim coroner for Chickasaw County says he wants to do more to make the area safer for all ages.

As interim coroner for Chickasaw County, Larry Harris can be on the road,  in the office or at community events, like a “Stop the Violence” rally this past Sunday in Okolona.

Harris was named interim coroner by  Chickasaw County supervisors, when longtime coroner Michael Fowler resigned this past summer, because of a conflict involving his state retirement.

Harris was deputy coroner for six years before he became interim coroner.  He is also a paramedic supervisor at NMMC.  As coroner, Harris is called out to most deaths in Chickasaw County.

“Ninety to ninety-five percent of deaths in Chickasaw County are ruled by coroners.  This includes hospitals, homicides, accidents, natural,” he said.

Harris sees his role as coroner as much more than a job.  He views it as a ministry, an opportunity to help families who are experiencing deep personal loss.

“In a way it is a passion, it’s caring, I wanted to help, and with that being said, I do, not only sign death certificates, I’m there for the family, to see them through their bereavement, to pray with them , to honor their wishes,” Harris said.

Harris is one of three candidates on the ballot for a special election November second for the coroner’s office.

The other two candidates running for coroner are; Robert “Andy” Harmon and Whitney Lancaster.  We will have stories on those two candidates leading up to the election on wcbi.com. 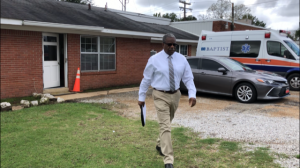 Cold front double threat to sweep through area next week

Roller coaster of cold continues with another system on Tuesday

Below average temperatures continue through the weekend