COLUMBUS, Mississippi (WCBI) – Temperatures stay generally below average through the weekend. Rain chances return early next week before temperatures take a major plunge by the end of next week.

FRIDAY: Expect a good supply of sun with highs in the 50s, similar to Thursday. High clouds will arrive late in the day.

FRIDAY NIGHT: Clouds become temporarily widespread across the region, and there’s a small chance of a sprinkle or two. Lows will drop to near freezing.

WEEKEND: Mostly sunny both days with highs struggling into the upper 40s to near 50 degrees. 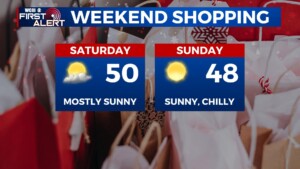 NEXT WEEK: The first of several disturbances arrives by Monday, bringing widespread clouds and increased chances for scattered rain. At this point, no wintry precip. is expected as temperatures reach the upper 40s before falling gradually through the day. Clouds will continue through mid-week with highs in the upper 40s. Another system looks to swing through Thursday, bringing a major drop in temperature by next Friday. At this point, we’re holding off on committing to any wintry precip. just yet; however, stay tuned for further updates!

Week ahead will be wet