COLUMBUS, Miss. (WCBI) – The City of Columbus is exploring its options for garbage service.

At its Tuesday night meeting, the City Council voted to put out a Request for Proposals (RFP) for trash pickup. 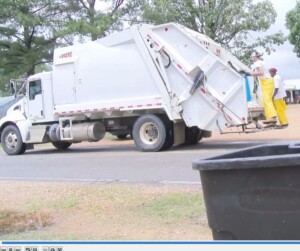 The city is advertising for companies that have enough equipment and staff to continue the twice a week pickup schedule, and that will provide garbage cans that are compatible with truck lift equipment to residents.

Other criteria include having a headquarters within 45 miles of Columbus.

Complaints about the city’s current waste contractor, Golden Triangle Waste Services, have been piling up for months as GTWS’s shortage of trucks and staff have caused significant delays in garbage collection.

There was some debate among council members, with Councilman Joseph Mickens voicing concerns about potential price increases, and Councilman Rusty Greene questioning whether the criteria might discourage some contractors from applying.

In the end, the motion passed unanimously. The city’s contract with Golden Triangle ends in September.