COLUMBUS, Mississippi (WCBI) – Warmer air will begin to surge back into the Deep South on Monday, but it won’t be sunshine and butterflies. Multiple rounds of rain are on the way next week. In fact, this could lead to localized flash flooding in parts of north Mississippi and north Alabama.

TONIGHT: Mostly cloudy skies. Low near 41° and we’ll be dry. It’ll be breezy, though. Winds will pick up out of the north at 5-10 mph, possibly gusting higher!

SUNDAY: For the most part, skies will remain mostly cloudy, but a few peaks of sunshine are possible early. High near 54°. The morning should be dry, but a few isolated showers will likely move in later in the afternoon, especially along the I-55 corridor. Not everyone will get rain, though. Chance of rain: 30%. 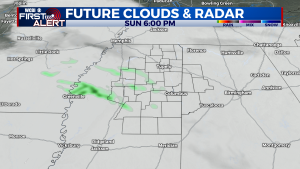 MONDAY: Overcast skies, but noticeably warmer. High near 64°. Scattered showers are expected to move through the region, especially farther north toward Tupelo and the Tennessee state line. Chance of rain: 40%.

NEXT WEEK: Overall, our weather pattern is looking unsettled and soggy. Daytime temperatures will remain in the 60s and 70s, with overnight lows in the 50s and 60s. That’s well above-average for this time of year. Daily rain chances continue through at least Thursday, but it won’t be a washout. Heavy rainfall over the next few days could lead to localized flash flooding in parts of north Mississippi, north Alabama, and southern Tennessee. 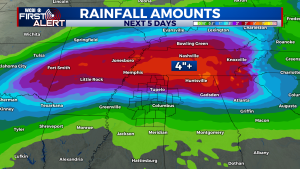