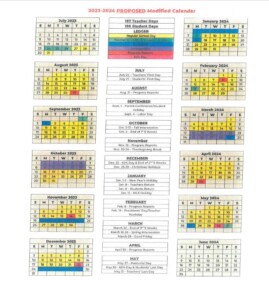 The Columbus Municipal School District Board of Trustees is holding a special call meeting Saturday.

Along with a couple of regular business matters, one of the items on the agenda is the “Discussion of Proposed 2023-2024 Academic Calendars”.

The Agenda packet for that meeting has two proposed calendars – the traditional August through May school year, and a proposed modified calendar that would run from July 27 to May 30.

It appears to follow the 9-2 model that is growing in popularity around the state.

It features a two-week intersession period between each nine-week grading period.

The Lowndes County School Board just approved a similarly modified calendar for 2023-2024.

It is not known if the board plans to vote on the calendar.

That meeting will be Saturday morning at 8 at Brandon Central Services.