COLUMBUS, Miss. (WCBI) – A Columbus police officer was injured and a patrol car was destroyed after a weekend pursuit. 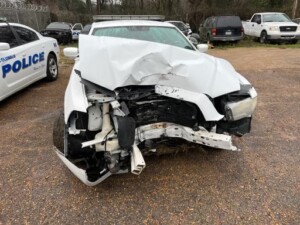 The CPD vehicle slammed into a pole on Saturday night, near the intersection of Bluecutt and Military Roads. We are told a second cruiser was also damaged.

Lowndes County Sheriff Eddie Hawkins said the officer was taken to the hospital to be checked out.

The pursuit went through town and the vehicle did get away.

There’s no word on why officers were chasing the vehicle.