Commissioner Presley took to social media for next step with TVA

MISSISSIPPI (WCBI) – The back and forth between Public Service Commissioner Brandon Presley and the Tennessee Valley Authority continues.

So, Presley took to social media to let the utility know his next step. 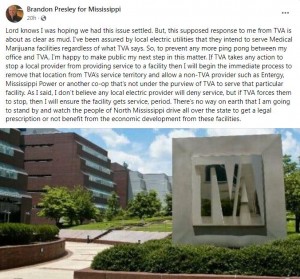 The controversy surrounds whether TVA will allow cooperatives and local utilities to provide electricity to medical marijuana facilities.

TVA has said there would be no interruption in service due to the medical marijuana program.

However, the large electric provider is a federal agency and must adhere to federal law.

Presley says the statement is clear as mud.

Now, Presley says if TVA stops a local provider from servicing a medical marijuana facility he will begin the process to remove that local from TVA’s service territory.

His plan would call for non-TVA providers to serve the facility.