STARKVILLE, Miss. (WCBI)- An event at the Cotton District Arts Festival is canceled after backlash from community members and city leaders.

Starkville Pride shared on social media, a drag show scheduled on the East Stage at the Cotton District Arts Festival, was canceled after individuals and organizations threatened to pull sponsorships. 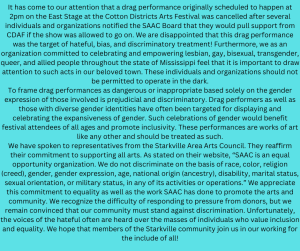 Starkville Pride said in part; “Such celebrations would benefit festival attendees of all ages and promote inclusivity. These performances are works of art and should be treated as such.”

Starkville Alderman Ben Carver was very vocal online about not attending CDAF if a drag show was to go on. He declined to talk on camera.

The volunteer of the music and entertainment for CDAF, Dave Hood, says the decision to cancel the show is due to a “cacophony of bile being emitted by hateful people.”

Hood shared the following statement on Facebook addressing the flack that the Starkville Area Arts Council has been getting in response to the cancellation of the drag show.

Dear Starkville, 10/26/2022
I’m writing to you in response to the flack the Starkville Area Arts Council received for booking a Drag Queen performance at this weekend’s Cotton District Arts Festival. In particular, my message is to the very vocal, hard-right, alt-Christian minority. I booked the show and did it with pride; excited about sharing 45 minutes of fun with our community.
When I was asked to volunteer to chair the music and entertainment portion of the CDAF I knew it would be a drag. It’s impossible to please the general public plus my regular job is so rewarding. The base crowd for my business (Dave’s Dark Horse Tavern) is diverse, intelligent, warm-hearted, and well-educated so 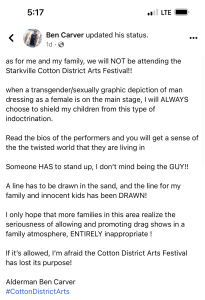 it’s easy to book all kinds of entertainment. There is something happening on my stage six nights a week. I knew this would be different.
I was party to the SAAC discussion when the hate began spewing two days ago. I felt bad for the position the committee was suddenly in even though we posted the line-up weeks ago. Threats to sponsorships, people quitting jobs, etc if the Drag Show went on. First-year organizers were paying the price for the choices in bookings I’d made and they were literally in tears. The decision to cancel the Drag Show was made because of the cacophony of bile being emitted by hateful people while our fellow citizens who would have loved to see the performance weren’t saying anything. They just didn’t realize what was going on I suspect. Noticeably but unsurprisingly no appreciation was expressed by the “Christian” hate mongers for the gospel acts scheduled to perform.
Tonight, I had a variety of input on the subject before I began to pen this letter. Some people regard our local haters as small-minded and cold-hearted. Many psychologists speculate that fear of their own latent homosexuality inspires most of the evil and meanness homophobes and transphobes express. Gandhi once said in answer to his thoughts on Christianity something akin to “I admire your Christ, but I’m not so sure about Christians, many are so unlike your Christ”. And Jesus is quoted as saying “This is my commandment, that ye love one another, as I have loved you” (John 15:12). Yet here we are.
Personally, I just kind of feel sorry for anyone who says they won’t go to our Cotton District Arts Festival because men would be dressed as ladies.
Much love to my town,
Dave Hood
WCBI reached out to the Cotton District Arts Festival and the SAAC. The SAAC says they’re working with Starkville Pride and the performers scheduled this weekend, to find a solution.
WCBI talked with one of the performers on camera who says it’s hurtful to hear the hatred spewing in the community. They’re hopeful that as a community everyone can learn to love one another.
This is a developing story.
For 24/7 news and updates, follow us on Facebook and Twitter
Categories: Featured, Local News

Cooler for now, more rain in the forecast