Liftoff from the Baikonur Cosmodrome in Kazakhstan is targeted for 4:05:06 a.m. EDT (1:05 p.m. local time). It will be the first piloted flight of an upgraded Soyuz 2.1a booster following a series of successful uncrewed launchings.

In a stark departure from normal routine, the usual crowd of family, friends and other well-wishers was not on hand at the sprawling spaceport to cheer the crew on, thanks to travel restrictions intended to slow the spread of the COVID-19 coronavirus.

A Soyuz 2.1a rocket was hauled to the pad at the Baikonur Cosmodrome in Kazakhstan earlier this week amid coronavirus protocols to minimize contact among spaceport workers. Roscosmos

“As crew members on a Soyuz rocket, we get 15 guests, including our spouse and children and that sort of thing,” Cassidy, making his third space flight, said in an interview with CBS News. “And so, none of those folks will come. Very limited operational support down there on the Russian side, as well as the NASA side.

“What’s super cool normally (on launch day) is you come walking out of the hotel where we stay for the whole two weeks that we’re down there, and there’s music playing, and there’s crowds of people lining the walkway as we proceed from the hotel to the buses. And it’s very, very motivating. It’s super exciting.”

This time around, “it’ll be completely quiet,” Cassidy said. “There won’t be anybody there. We’ll just kind of walk out. Maybe we’ll still play music and fire the three of us up ourselves, but who knows?”

To reach the space station, the Soyuz launch was timed to coincide with the moment Earth’s rotation carried the pad into the plane of the lab’s orbit. On Thursday, the station is expected to fly directly over the cosmodrome a few minutes before liftoff, moving nearly 600 miles ahead by the time the crew begins its climb to orbit. 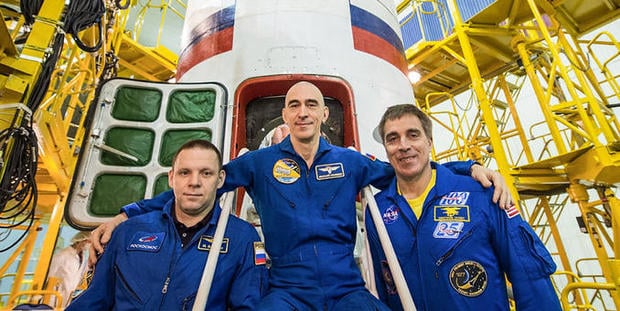 Just eight days after docking, Skripochka, Meir and Morgan plan to return to Earth aboard the Soyuz MS-15/61S spacecraft, landing on the steppe of Kazakhstan near the town of Dzhezkazgan around 1:17 a.m. EDT on April 17.

Cassidy, who will serve as commander of the three-man Expedition 63 crew, will be the lone American on board the station until SpaceX’s commercial Crew Dragon spacecraft finally takes off in late May or thereabouts. That long-awaited flight will be the first piloted launch from U.S. soil since the space shuttle was retired in 2011.

On board the Crew Dragon will be veteran NASA astronauts Douglas Hurley and Robert Behnken. Despite being classified as a test flight, both men have received additional training to operate station experiments.

But NASA’s commercial crew program, already running two years behind schedule, has been repeatedly delayed by funding shortfalls and technical problems and the current late-May launch target is far from guaranteed.

With the Kennedy Space Center closed to all but essential personnel to minimize possible exposure to the coronavirus, NASA and SpaceX must get through a battery of remotely conducted reviews to verify the readiness of the spacecraft, astronauts and ground systems to support launch.

SpaceX is not subject to the same work rules as NASA civil servants and it’s not yet known what impact the coronavirus might have on the hardware processing schedule, but the company is pressing ahead with launch preparations. Last week, Hurley and Behnken took part in emergency training at launch pad 39A.

NASA managers had expected to already be launching astronauts aboard SpaceX and Boeing commercial crew ships by now, ending the agency’s sole reliance on the Soyuz. Equally important, the new crew ships are needed to ensure the presence of three to four U.S.-sponsored astronauts aboard the station at all times to carry out a full slate of scientific research.

Anticipating the advent of U.S. commercial crew ships, Russia scaled back production of its three-seat Soyuz spacecraft and only two will be launched this year: the Soyuz MS-16/62S vehicle on Thursday and the second on October 14.

NASA currently only has one Soyuz seat — Cassidy’s — under contract with Roscosmos. The agency is negotiating for a seat aboard the October flight and possibly a second seat next spring, but no contracts have yet been signed.

Uncertainty about the commercial crew schedule prompted NASA last year to put Cassidy on the Soyuz MS-16/62S crew in place of Japanese astronaut Akihiko Hoshide. A space veteran, Hoshide was expected to serve as space station commander during the Tokyo Summer Olympics, a prestigious assignment for JAXA, the Japanese space agency. 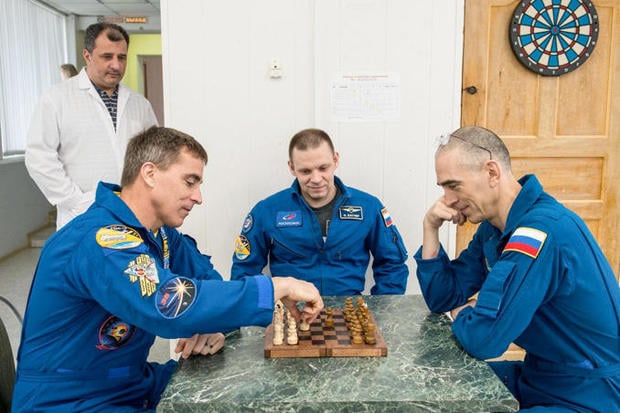 Chris Cassidy, left, plays chess with Soyuz commander Anatoli Ivanishin while flight engineer Ivan Vagner looks on. No word on who one. NASA

But at least one U.S. astronaut is required to be aboard the space station at all times to operate and maintain NASA systems. Given delays in the commercial crew program, NASA put Cassidy on the Soyuz crew in Hoshide’s place as a precaution to ensure a U.S. presence on the station in the event of additional commercial crew delays.

“We’re good buddies, fortunately,” Cassidy said of Hoshide. “He’s a true professional. Any astronaut wants to be on a rocket with their name on it, and I’m sure he’s no different. But it ultimately wasn’t about any person, it was about protecting U.S. presence in space.”

Tom Stafford, a Gemini and Apollo-era astronaut with a long history of working with the Russians, participated in a joint NASA-Roscosmos review last December. He summed up the consensus in stark terms during a space station advisory committee teleconference on March 30.

“The joint commission believes there is a significant technical risk due to further delay in the U.S. crew vehicle, USCV, schedule,” he said. “Without the USCV and without ensuring additional US Soyuz seats, then there’ll be no U.S. crew members on the ISS after October (21), that is, until we finally get the USCV in operation and up there.

“The ISS has always required at least one U.S. and Russian crew member for safe operations,” he continued. “Without U.S. crew on board, failure of critical U.S. orbital segment (equipment) could result in the loss of the ISS. It is imperative that NASA and Roscosmos find a way to guarantee at least one appropriately trained U.S. and Russian crew members on board the ISS at all times.”

While NASA managers believe commercial crew ships will be flying in the not-too-distant future, “both sides are planning for the reality there may be only one (U.S.) crew member on the ISS for the foreseeable future, until the USCV is available,” Stafford said.

Cassidy, speaking to reporters last November during training at the Johnson Space Center, said his crew is up to the challenge.

“We’re … ready operationally, mentally prepared, to just be the three of us on the space station, which will be a change in operations from what we’re used to today (with) six people,” he said.

“There’ll be less available crew hours (for science), because you still have to devote your baseline number of hours per week or whatever to keeping the thing running. So it’ll be (a) change in philosophy and how we manage crew time. But the goal is still the same, to maximize science hours and research, and we’ll do our best to do that.”