SUMMARY: Tropical Storm Nicholas formed Sunday in the Gulf and could increase rain chances for the Southeast later in the week. Temperatures look to stay generally below average through the next seven days.

MONDAY: Expect a mix of sun and clouds through the day, with more clouds moving in late in the day. Scattered showers and possibly a few thunderstorms are possible in the afternoon hours as well with highs in the middle 80s. 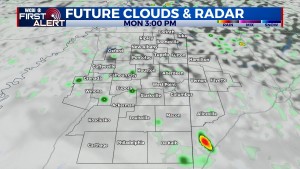 TUESDAY: The sky becomes overcast  through the day with scattered to potentially numerous showers in the afternoon. Daytime highs will likely hold in the 70s in response to increased cloud cover.

WEDNESDAY: This looks to be the wettest of the next seven days as the remnant circulation of Nicholas moves toward the state. Expect occasionally heavy rain at times through the day with highs in the 70s. 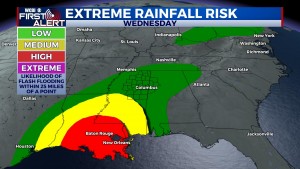 THURSDAY/FRIDAY: Whatever is left of Nicholas will have moved past the region by this time, but lingering moisture along with building heat levels will continue producing a daily rain chance. Afternoon highs will return to the mid 80s – near normal for this time of the year.

WEEKEND: At least isolated showers stay possible Saturday and Sunday with highs in the middle 80s.