,
South Carolina Rep. Jim Clyburn is hosting his annual “Fish Fry” event in Columbia Friday, and just about all the Democrats running for president — 22 — will gather there to make their pitch to voters in a critical early primary state.

South Carolina hosts the first primary in the South on Feb. 29, 2020. It’s considered a key state for candidates, where black voters make up 61% of the electorate. If a candidate does well in South Carolina, it could be seen as an indicator for his or her support among black voters across the country.

Most of the candidates plan to stick around Saturday, when the South Carolina Democratic Party will be holding its annual convention and elect its officers.

Tune in at 7:00 pm for more of CBS’s interview with South Carolina Rep. Jim Clyburn, only on CBSN.

As 22 presidential candidates descend on Rep. Clyburn’s fish fry (which he thinks may be a record), the South Carolina kingmaker says that the contenders need to focus on accessibility and affordability in their policy proposals.

“I’ve been saying ,what we’re trying to do is try to pick a presidential candidate who can make the greatness of this country accessible and affordable for all of its citizens. Whatever they talk about I’d hope they’d get out of the clouds and get down to where people are,” Clyburn told CBSN’s Elaine Quijano.

“If you’re gonna talk about health care, answer the question, ‘How will I make it accessible — how will I make it affordable?” he explained. He advised candidates to be as explicit as possible about their plans for Americans and South Carolina voters when they make their pitches this weekend.

Who’s coming to the fish fry?

Some 3,000 people are expected to show up, with Clyburn and Rep. Joe Cunningham kicking off the fish fry with speeches. Candidates are expected to give the crowd shorter versions of their stump speeches.

Here is the list of candidates attending the fish fry:

What’s the proper way to eat fish at the fish fry?

Food often presents a campaign trail hazard for presidential candidates. Ask John Kerry, who infamously ordered Swiss cheese with his cheesesteak in Philadelphia. Or Mitt Romney, who misspoke about his “cheesy grits” in Mississippi. In the last election, John Kasich found himself pilloried for eating his pizza with a knife and fork.

The fish fry features fish dredged in cornmeal, flour and spices and then cooked in vats of hot oil and served on a slice of white bread with hot sauce.

Clyburn may not be endorsing anyone, but he’s at least helping candidates avoid fish fry food flubs. He tweeted instructions and a short video of former President Obama eating at the fish fry when he was a candidate.

How to properly eat fish at a fish fry:

Organizers ordered 4,400 pounds of fish and 6,400 slices of bread to feed the masses.

Clyburn, who is the most powerful African American in the House, holds the position of a political kingmaker in the state. His fish fry, which he has hosted for nearly 30 years, has become a key campaign stop for presidential candidates, especially after South Carolina officially became an early primary state in 2008. Although he declined to make an endorsement in the 2008 Democratic primaries, Clyburn endorsed Hillary Clinton over Bernie Sanders in 2016.

Days before the fish fry, Biden attracted controversy when he talked about his relationship with James Eastland, a Mississippi senator and noted segregationist, at a fundraiser in New York City Tuesday. Biden referenced Eastland while arguing for more civility in Washington.

“I was in a caucus with James O. Eastland,” Biden told the crowd. “He never called me ‘Boy.’ He always called me ‘Son.'”

Eastland, the longtime chair of the Senate Judiciary Committee, ardently opposed the civil rights movement and was an avowed white supremacist.

“At least there was some civility,” Biden said in his remarks Tuesday. “We got things done. We didn’t agree on much of anything. We got things done.” Today, he said, “You look at the other side and you’re the enemy.”

On Wednesday, some of his Democratic opponents criticized him for the remarks and a couple even called on him to apologize. Biden said Wednesday, “The point I’m making is you don’t have to agree. You don’t have to like the people in terms of their views but you just simply make the case and you beat them.” He did not apologize, declaring instead, “There’s not a racist bone in my body.” 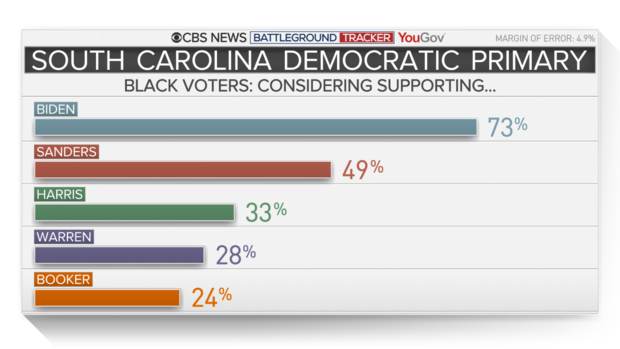 Biden’s ties to President Barack Obama are helping boost him to the front of the pack in South Carolina and across early voting states. More than eight in 10 (including most whites and blacks) say his history as President Obama’s vice president is a reason they are considering backing him, outranking things like his policy stances and his time in the Senate. 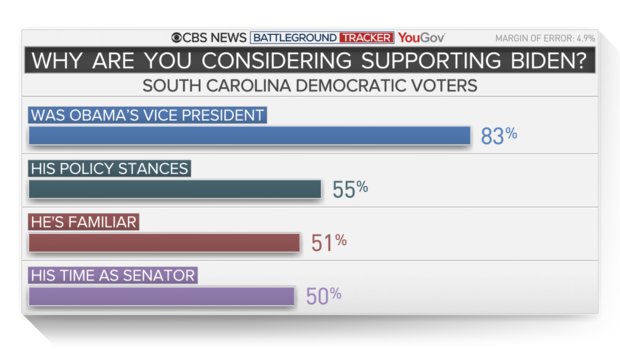