Dog meat soup for sale in shadow of Olympic stadium

PYEONGCHANG, South Korea — Canadian figure skater Meagan Duhamel is hoping to win a gold medal in South Korea this month – though no prize could be more life-changing than her previous Pyeongchang souvenir.

Not after last year, when the two-time world champion pairs skater brought home Moo-tae – an affable miniature dachshund mix with big ears, bowed legs and the bad luck of being born into the Korean dog meat trade. Duhamel, a vegan and animal lover, helped rescue Moo-tae by accompanying him on his flight from South Korea to Canada last February. The 2-year-old pup has been living with her and husband/coach Bruno Marcotte in Montreal since, spending his days doing yoga with Duhamel and making friends at the local dog park.

It’s been a different life for Moo-tae. Like roughly 2 million dogs each year, he was supposed to be raised on a Korean dog meat farm, where conditions are often poor. Moo-tae may have been locked in a cage, beaten or left without food or water. Certainly, he would have been sold and slaughtered, then probably served in soup at one of many restaurants still popular among Korea’s elderly population.

Dog meat is a traditional dish in Korea dating back to the period of the three kingdoms BC 57 – AD 668, called the Samkuk period

Koreans have been eating dog for thousands of years, though the practice has waned recently and most in the country don’t do it regularly. Many older Koreans believe dog meat aids virility, though younger citizens are largely either against the practice or indifferent to it. The country has begun shifting away from dog consumption as pet ownership has increased, with one in five households owning either a dog or a cat as of 2016. Some major dog meat shops – like the Moran Market in Seongnam – have been shuttered, and President Moon Jae-in even made a campaign promise to adopt a shelter dog if he won last year’s presidential election. He welcomed a 4-year-old mixed breed named Tory in July.

Still, the industry persists, and despite pressure from animal rights groups – particularly from Western countries – Pyeongchang won’t completely shelter Olympic visitors from the trade this month. Area restaurants were offered government aid if they stopped selling dog meat, but some declined to change their menus, fearing they’d spurn regular patrons and be left without customers once the tourists left town.

“I have been selling dog meat for decades. It is really difficult for me to change my menu just because of the Olympics,” said Park Young-ae, 60, whose Young Hoon Restaurant is nearly in the shadow of the Olympic Stadium. 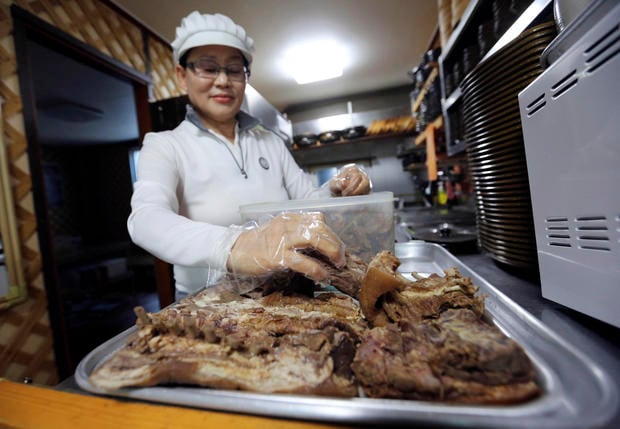 A Gangwon province official told The Associated Press there were no plans to relocate dog farms situated near Olympic areas. There is one farm near Pyeongchang; six near Jeongseon, where the downhill skiing course is located; and 10 in Gangnueng, the coastal town that will host events like figure skating and hockey. Gangwon has 196 registered dog farms, though most are closer to Seoul.

Moo-tae’s adoption was organized through one such group: Free Korean Dogs. Founder EK Park was born in South Korea and now lives in Toronto, and she oversees adoptions that bring dogs to Canada and the United States. She worked on Moo-tae’s adoption personally.

Buddhists in the southern part of the country helped rescue Moo-tae from a farm as a puppy, and Park found him living on a monastery.

“He loved to sit with the Buddhas during meditation and yoga,” said Duhamel, who meditates daily. “I thought, ‘Oh my God, maybe this dog has some special spiritual energy.’ That was really why I chose him.”

Park picked up Moo-tae last year and drove eight hours north to meet Duhamel in Pyeongchang, where she and partner Eric Radford were competing at Four Continents in a test run for the Olympic rink. Moo-tae met his new parents in a parking lot outside the venue, calmly curling up in Duhamel’s arms shortly after being introduced.

“Most of the time, he just wants to sit in everybody’s arms,” Duhamel said. “He doesn’t even care to play, he just walks up to everybody and wants to be held.”

Park, Moo-tae and a second dog, Sara, met Duhamel at the airport in Seoul days later so that Duhamel could fly the dogs back to Toronto. Moo-tae went home with Duhamel and Marcotte, while Sara was united with another eager family waiting for her in Canada. Duhamel’s parents, Heidi and Daniel, adopted their own pup through Park’s organization a few months later.

Duhamel and Park hoped that other athletes might serve as flight volunteers coming back from the Olympics, but Air Canada was too tight on space for that many dogs. Free Korean Dogs handles most everything related to adoptions, including paperwork, vaccinations and crates for transportation, but the organization can’t afford the thousands of dollars necessary to ship each dog without those travelers.

“We have to really rely on flight volunteers flying from Korea to Canada,” Park said. “That’s like 90 percent of what we do.”

Korean rescues routinely have a hard time adjusting to their new homes, and Free Korean Dogs monitors adopted dogs after they’ve been paired with families.

Moo-tae, though, took right to life in Canada. He’s inseparable from his new brother, a 4-year-old rescued beagle named Theo. The family also has a rescued cat, Zara, living in its small Montreal condo.

“He brings a very special energy,” Duhamel said. “I meditate every day, and he sits beside me patiently while I meditate. I don’t know if he was trained to do that.”

The only remaining mark from Moo-tae’s past is physical — his front legs are a bit misshapen, possibly from abuse as a puppy.

Otherwise, he’s happy as could be.

“Moo-tae was so strong and calm,” Duhamel said. “That’s a funny way to describe a dog, but that’s exactly how I’d describe him. He’s so content.

“We have a lady that walks our dogs every day while we’re training, and she says Moo-tae is the most popular dog in the dog park.”

Duhamel, a Sochi silver medalist in the team event, is planning to do more to undercut the dog meat industry on this trip to Korea with Humane Society International. She, American skier Gus Kenworthy and American snowboarder Lindsey Jacobellis have appeared in a public service announcement about the dog meat trade, and Duhamel is also hoping to assist in shuttering a farm or two once she’s done competing in South Korea.

She’s also arranged with Park to fly home another rescued dog when she returns to Canada. This one, though, won’t be coming all the way home with her.

“I don’t have the luxury of keeping another dog in my small condo,” she said. “As much as I would love to.”