Dorian expected to be “extremely dangerous” as it heads for U.S.

,
Hurricane Dorian on track to strike Florida as a Category 4 storm

Hurricane Dorian strengthened to a Category 2 storm Thursday night. It’s expected to intensify into a Category 3 hurricane Friday and stay at least that strong as it makes its way to the U.S. mainland, the National Hurricane Center said.

“Dorian is likely to remain an extremely dangerous hurricane while it moves near the northwestern Bahamas and approaches the Florida peninsula through the weekend,” the center said.

There’s a good chance Dorian will power its way into a Category 4 with potentially catastrophic 140 mph winds before making landfall on the mainland U.S., the center added, according to CBS News weather producer David Parkinson.

He said Dorian would probably make landfall early Monday evening at the earliest and Tuesday morning at the latest, probably over the central Florida Atlantic coast though possibly farther south.

Florida residents rushed to supermarkets across the state to buy food and supplies.

The National Weather Service said Dorian could bring a “triple-threat of dangers” to the state, including a “life-threatening storm surge, devastating hurricane-force winds and heavy rains.” The center urged Floridians to “prepare NOW.”

Florida Governor Ron DeSantis expanded the state of emergency he’d already declared to cover all counties in the state and asked President Trump for a pre-landfall disaster declaration.

The government of the Bahamas issued a hurricane watch for the northwestern part of the chain.

Mr. Trump canceled a weekend visit to Poland to focus on the federal storm response.

“All indications are it’s going to hit very hard and it’s going to be very big,” he said in a video he tweeted Thursday evening, comparing Dorian to Hurricane Andrew, which devastated South Florida in 1992.

As of 11 a.m. EDT Friday, Dorian’s center was some 660 miles east of West Palm Beach, Florida, and about 480 miles east of the northwestern Bahamas as it headed northwest at 10 mph, the hurricane center said. Dorian had maximum sustained winds of 110 mph.

It’s never too early to start preparing a hurricane kit

The National Weather Service is encouraging anyone in the path of the storm that it’s “never too early” to start preparing a hurricane kit.

CBS News has rounded up some emergency preparedness tips for people and pets, as well as a checklist of supplies to have on hand before a big storm arrives.

What supplies do you need to prepare for a hurricane?

Ahead of potentially devastating storms this hurricane season, the Red Cross recommends having the following supplies on hand:

University of Miami to suspend classes until Wednesday

The University of Miami said it has canceled classes at the Coral Gables, marine and medical campuses beginning at noon on Friday, August 30 through Tuesday, September 3.

The university also said it is putting storm shutters in place and positioning sandbags near doorways at those three campuses.

Florida Governor Ron DeSantis tweeted that he has activated more than 2,500 Florida National Guard troops as the state braces for Hurricane Dorian.

He added: “I encourage all Floridians to continue to monitor and heed all warnings.”

President Trump has posted a video on Twitter encouraging Florida residents to prepare for Hurricane Dorian as the government makes its own preparations.

In a video posted Thursday evening from the White House Rose Garden, Mr. Trump said Dorian initially appeared to be a small storm, but has grown quickly over the past day.

Mr. Trump said: “It’s looking like it could be an absolute monster.”

“We’re actively working with other utilities from across the United States to secure additional crews and equipment and pre-positioning resources in advance of the storm’s landfall, so we are ready to respond as soon as it is safe to do so,” said Eric Silagy, president and CEO of Florida Power and Light.

Georgia Governor Brian Kemp has declared a state of emergency for 12 counties along the state’s coastline. The declaration, which went into effect Thursday, frees up state resources and prohibits price gouging for goods and services.

The U.S. Air Force has begun evacuating KC-135 aircraft at the MacDill Air Force Base near Tampa, CBS affiliate WTSP-TV reported. The planes were evacuated as a precaution and are expected to return when the storm passes. Officials do not expect to evacuate service members and staff from the facility.

“The safety of our service members, families, and aircraft are paramount,” said Colonel Stephen Snelson.

Rolling Stones fans in South Florida will be able to get some satisfaction, just a day earlier than originally scheduled, CBS Miami reported. The Rolling Stones concert, scheduled for Saturday, August 31 at the Hard Rock Stadium, is being moved ahead to Friday night, August 30 because of the storm.

All tickets will be honored for the new date. Miami is the final stop on the Rolling Stones’ “No Filter” tour, which was already delayed once when Mick Jagger underwent heart surgery.

NASA civil servants and contractors at the Kennedy Space Center in Florida are bracing for high winds and rain from Dorian. Ahead of the storm, they are securing rocket stages, spacecraft assembly areas and even hauling a 6.7-million-pound mobile launch tower, designed for the huge rocket being built for the Artemis moon program, back to the cavernous Vehicle Assembly Building for safekeeping.

The 355-foot-tall gantry structure, carried atop a squat Apollo-era crawler-transporter, is scheduled to begin the 4.2-mile trip from launch complex 39B back to the protection of the VAB at dawn Friday — a journey that’s expected to take more than eight hours to complete.

The VAB was designed to withstand winds of 125 miles per hour without major damage. The highest wind ever recorded at NASA’s seaside launch pads during an earlier hurricane was around 115 mph.

Trump cancels Poland trip ahead of the storm

President Trump on Thursday canceled his trip to Poland ahead of the storm. Mr. Trump made the announcement during a White House event launching the U.S. Space Command.

“To ensure that all resources of the federal government are focused on the arriving storm I have decided to send our vice president, Mike Pence, to Poland this weekend in my place,” the president said. “It’s something very important for me to be here.”

Mr. Trump said he would reschedule his Poland trip for some point in the not-so-distant future.

​Residents stock up as others leave town

Some Florida residents are stockpiling supplies, while others are packing up and leaving the state ahead of the storm. The shelves were empty at one Publix in the city of Lake Worth

“We have three kids at home and a cat and just trying to prepare. We were very relaxed but everybody’s getting into it, so we wanted to make sure we got prepared,” resident Carrie Dorman told CBS Miami.

Others were making plans to leave. Tommy Ligorie and his daughter were trying to get back to New York, not wanting to stick around to see where Dorian ends up.

“Unfortunately I called this morning to see if we could get flights out and it was all booked up. And the flights I did find were unfortunately way high and we couldn’t afford it, so we have to take the route and driving back,” Ligorie said. 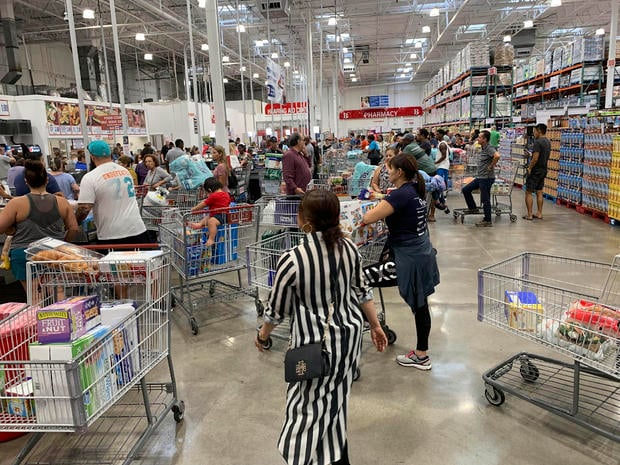 Shoppers stand in line waiting to check out at Costco ahead of Hurricane Dorian on August 29, 2019, in Davie, Florida. Brynn Anderson / AP

Video from the International Space Station shows the Category 1 storm around 1:05 p.m. ET as it moved across the Atlantic and north of Puerto Rico. The space station shared video on its official Twitter account Thursday.

A camera outside the station captured views of Hurricane Dorian at 1:05pm ET today as it churned over the Atlantic Ocean north of Puerto Rico. pic.twitter.com/ZlfKPcuIQO

​83 flights within the U.S. canceled

Airlines have canceled 83 flights to, from and within the U.S., according to FlightAware.com. Seventy-eight flights were canceled Thursday and five have been canceled for Friday.

The number of cancellations should increase closer to Monday morning as Dorian makes landfall on Florida’s east coast. Expect flights to and from Orlando, Miami and other airports in that area to be most affected.

DeSantis encouraged residents to gather seven days of supplies, including water, food and medicine. “If you’re in the path of this storm — anywhere on the east coast of Florida — make your preparations,” he said at a press conference Thursday. “Take action.”

DeSantis said people who live in the area where Dorian makes landfall should expect to lose power. “If you live in an area that experiences flooding, well, you’re looking at potential serious significant water and flooding because of this event, so prepare for that,” he said.

The governor urged people to listen to their local officials and follow any evacuation orders.

.@NHC_Atlantic is forecasting that #Dorian could be a major Hurricane. We’ve been monitoring this storm with @FLSERT and will continue to watch closely. All Floridians on the East Coast should have 7 days of supplies, prepare their homes & follow the track closely.

The National Hurricane Center warned early Thursday that heavy rain from Dorian could cause “life-threatening flash floods” in parts of the Bahamas and southeastern U.S. coast.

The center forecast 2-4 inches of rain in some parts of the Bahamas, with six inches in isolated spots, and 4-8 inches with an upside of a foot in other areas of the Bahamas and coastal southeastern U.S.

CBS News weather producer David Parkinson pointed out that, “With a new supermoon and the angle the storm is approaching from, widespread coastal flooding, including severe coastal flooding is likely. In addition, as the storm is coming in for landfall, it looks like it might lose some of the steering currents,” slowing it down and resulting in even more rain.

Miami resident Lanada Means said she purchased plywood at Home Depot on Wednesday to begin preparing for the storm. “My daughter messages me on Instagram and asked me if I knew about the storm, and I didn’t, so I came here on my lunch break. Tomorrow is gonna be crazy,” she told CBS Miami.

Carol Brafman said she is buying enough supplies for five family members. “They come to my house because I have a generator,” she told CBS Miami. “We’ve been through [Hurricane] Andrew and the last one we went north to Carolina. It’s not easy. None of us know.” 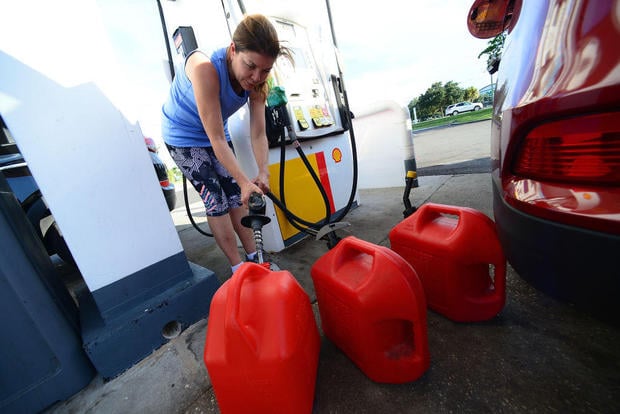 There were some reports of power outages and flooding in the U.S. Virgin Islands, British Virgin Islands and Puerto Rican islands of Vieques and Culebra, the Associated Press reported. But Culebra Mayor William Solís said only one community lost power Wednesday.

“We’re happy because there are no damages to report,” Solís told the AP.

U.S. Virgin Islands Governor Albert Bryan Jr. closed schools and government offices and issued a curfew from noon Wednesday until 6 a.m. Thursday morning. “This means that only emergency responders and those providing essential services would be permitted on the road at this time,” he said in a statement. “We ask for the public’s full cooperation during this time.”

Puerto Rican police said an 80-year-old man died in Bayamón on Wednesday as he made preparations ahead of the storm, the Associated Press reported. The victim fell from the roof of his home after attempting to clear debris off of it.