Dreary weather sticks around Friday, but we rebound over the weekend

COLUMBUS, Mississippi (WCBI) – Cool and breezy conditions stick around on Friday, but the weekend is looking much warmer and sunnier!

TOMORROW: Cool and breezy. Mostly cloudy skies. An isolated shower or two is possible for some of us, but only a drizzle. High near 56 degrees. Winds: WNW at 10-15 mph, gusting as high as 25! Chance of rain: 10%. 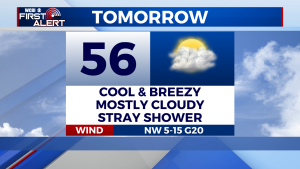 SATURDAY: Patchy frost is likely during the morning. Other than that, sunny skies. High near 65 degrees.

WHAT WE’RE WATCHING: Sunday will be the nicest day of the short term forecast, but rain and storm chances return on Monday. There is a lot of inconsistency in medium-range model guidance, so the forecast remains blurry. As of now, the current thinking is a round of scattered showers/storms on Monday, then a better chance for thunderstorms on Tuesday and Wednesday. It’s possible that we see a severe weather threat materialize from this upcoming storm system, but that’s yet to be determined. Depending on how it unfolds, shower/storms chances may linger into Thursday. We’ll keep an eye on it and bring you updates as they’re needed!