Elite unit works to give fellow Marines the funeral they deserve

Arlington, Virginia — All Marines train hard. But few are tougher and none are stronger than an elite unit of 10 Marines stationed in Washington, D.C.

“It’s one of those things where, if you don’t go through it, sir, nobody will really understand,” said Corporal Kevin Allen.

He’s right about that. In this case, not even seeing, is believing. Corporal Luke Givens is their platoon sergeant.

“We have such a unique group of individuals that are able to live up to the very strict standard of what we need out at Arlington every day,” he said.

The mission of these mightiest of Marines is to shoulder the burden of American grief. They are the Body Bearers and every day at Arlington National Cemetery, in teams of six, they carry the caskets.

Other branches of the service use eight men and carry lower. But Marines pride themselves on doing more with less and they take that pride to the grave.

To do this, and to make it look so effortless, they practice with a weighted coffin day and night, in the basement of an old parking garage at Marine Barracks Washington.

“We want it to be so level and so smooth that it looks like it’s just floating across Arlington,” said Lieutenant Corporal Mitchell Wojtowicz.

“Then that’s their last memory of their loved one. He must have been one of them, just as flawless as them,” he said. 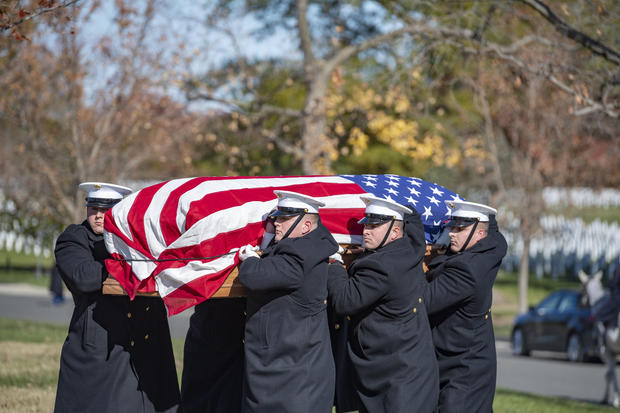 On one recent day, the ceremony was for a retired colonel with more than 30 years of active duty service, including Vietnam. But a rank private gets the same level of devotion from these men, summed up in their motto: The last to let you down.

“This is the most honorable, humbling thing I’ve ever done in my life,” Allen said.

The Body Bearers don’t often do interviews. They’re uncomfortable with the attention and after this story is done, Corporal Givens has politely asked that you never consider them again.

“We would just ask I guess that people don’t think about us, that they spare a thought to think about the Marines that we are honoring, and pay respect to them,” he said.