CBS News’ Jeff Glor recently met the Thomson girls at Arlington National Cemetery’s section 60, the final resting place for the men and women who died in Iraq and Afghanistan.

“Tell me what it’s like visiting here,” Glor asked.

“Well, when you come here, you think back to the funeral, and when the last time you said goodbye [was],” Aynsley said.

There are more than 5,000 Gold Star kids around the country, grieving the death of a parent, sibling or close relative. They come together each year at the Good Grief Camp, run by the Tragedy Assistance Program for Survivors, or TAPS.

While there, they find empathy from legacy mentors — kids who have experienced the worst kind of pain, and who are now remarkably helping others through theirs.

That includes kids like Brooke Nyren, who lost her father, Army Staff Sgt. Nathaniel Nyren in Iraq 13 years ago. She says she still remembers hearing the news, starting with a knock on the door.

“I saw two men standing there in uniform and I knew exactly what it meant,” she said. “And the whole time I stood standing there saying, ‘I know he’s dead, because why else would they come to the house?’ I felt like I lost my whole world. He was so important to me.” 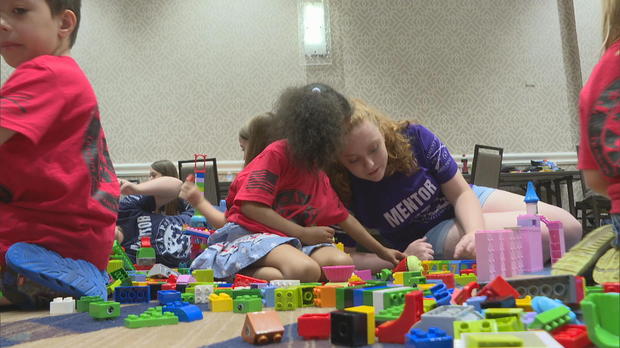 Gold Star kids get support at the Good Grief Camp

“I really don’t where I would be if I didn’t have TAPS. They were the ones there for me when no one else was,” she said.

“I never thought i’d be able to relate to an 8-year-old. But here we are sharing very similar stories about our dads,” she said.

Corbin Cabrera, now 19, first attended the camp when he was 15, after losing his dad, Army Col. David Cabrera.

“I was lucky enough to have a mentor who could get through to me in a way that helped me tremendously,” he said.

Corbin is now Brynnly’s mentor. They are brought together by the death of a loved one. But they know find joy sharing memories of life.

“I see the look on Brynnly’s face when your name is mentioned. That’s pretty great,” Glor said.

“There’s nothing like it,” Corbin said. “Because not only do we get to help the kids — in a way the kids help us.”

For these Gold Star kids, grief and pride come in equal measure.

“At the end of the day when I can help somebody else not have to go through some of the stuff I went through before I came to TAPS, it means the world to me,” Corbin said.

“We’re happy because we’re all with each other,” said Brooke. “While we all feel a million different emotions all at the same time, there’s still that sense of happiness and hope we all feel because we know we’re together and we are not alone in the world.”