Fort Leonard Wood, Mo. — One by one, the young soldiers stepped forward methodically, announcing their rank, last name and hometown.

By the time it was Cesar Vargas’ turn, his brothers and sisters in arms in Charlie Company had mapped out locations across the U.S. and around the world — from Omaha, Nebraska and Brooklyn, to West Africa’s Burkina Faso and Lima, Peru.

“Puebla, Mexico!” the 35-year-old Vargas shouted, stepping in front of his comrades, many of whom had recently graduated from high school.

The stark age difference between him and the other boot camp graduates was not lost on Vargas, now a specialist in the Army Reserve. Since he was a teenager, he’s been trying to join the armed forces. “After 9/11 — as a New Yorker — I took it very personally,” he told CBS News. “And while many of my friends were trying to enlist, I couldn’t because of my immigration status.”

“When I was told by my guidance counselor that I couldn’t join the military because I was quote-unquote ‘illegal’ or ‘undocumented,’ for me, at 16, 15 years old, my world collapsed,” Vargas said, adding that he felt he was letting his country down.

Born in central Mexico, Vargas came to the U.S. in 1990 as a 5-year-old with his mother and three siblings. Like many undocumented immigrants, the family crossed the southwestern border to enter the country. Throughout their time in America, they have lived in the Bronx, Brooklyn and Staten Island, where his family still resides today.

Vargas’ enlistment in the Army Reserve marked the culmination of a remarkable, nearly two-decades-long journey from undocumented immigrant to trail-blazing attorney and activist. It also served as a stark reminder that the country Vargas has fought so hard to serve in uniform is still leaving many — including his family — in the shadows.

“This is the country of opportunity”

Sitting on one of the beds of a motel room outside the Fort Leonard Wood U.S. Army base — nestled in the green and sprawling Missouri Ozarks — Vargas’ mother, Teresa Galindo, 74, said she undertook a journey to the U.S. to seek a better future for her children.

“This is the country of opportunity. They were able to study and start their careers,” she told CBS News in an interview in Spanish. “In Mexico, I was alone, and I couldn’t give them what they have here.”

The trip from Staten Island to central Missouri was bittersweet for Galindo, who is undocumented. She was glad to see Vargas, her eldest son, after spending 10 weeks apart during his basic training. But she was also dismayed after finding out she would not be able to attend his graduation ceremony inside the base. 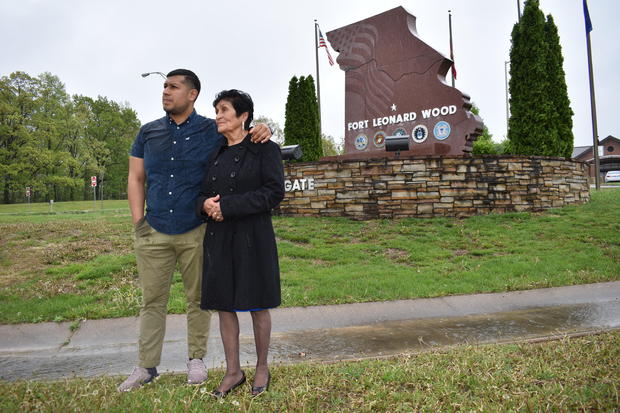 Teresa Galindo, 74, was not allowed inside the Fort Leonard Wood U.S. Army base in Missouri to attend her son’s boot camp graduation because she is undocumented.   Camilo Montoya-Galvez

When she and her youngest son, Carlos, 33, a Deferred Action for Childhood Arrivals (DACA) recipient, asked guards at Fort Leonard Wood if they would be allowed in, Galindo said they were told they lacked proper documentation to enter the base, and they would be taking a risk by submitting to a background check — which the base requires for any visitor who is not a U.S. citizen. A spokesperson for the base confirmed that Galindo was denied entry because of the visitor access guidelines at military installations.

“I feel sad because I wanted to be there, in the moment he graduated,” she added. “But I’m also proud that he is brave. Whether his family or his mother is there, he feels happy — which, for me, is the important thing.”

As an immigrant and mother of a U.S. service member, Galindo said she felt “discriminated” by the base’s policy.

Vargas was also disappointed. He said his mother’s absence was conspicuous the day before graduation, when the base arranged events for families to see their loved ones in uniform. But he said the graduation ceremony was still gratifying and served as a tribute to his mother’s toil.

“It’s a realization of the effort and sacrifice of my mother, who came here, risked everything to give me a better life, to provide us with a chance of the American dream,” he said. “She has been a bedrock, a pillar of me graduating college, graduating law school and now achieving and graduating from basic combat training.”

Galindo did not want her son to join the military. “He had his career as a lawyer and going to the Army — for me ­­­— seemed difficult because I wouldn’t be able to talk to him.”

She felt her son would be “starting from scratch,” needlessly.

Vargas did not disagree. “Financially, it didn’t make sense,” he said. “Professionally, many people were saying, ‘Why don’t you just continue as a lawyer and be an advocate and continue representing military families?'”

Still, he believed he had already overcome too many obstacles to not make good on a longtime commitment. 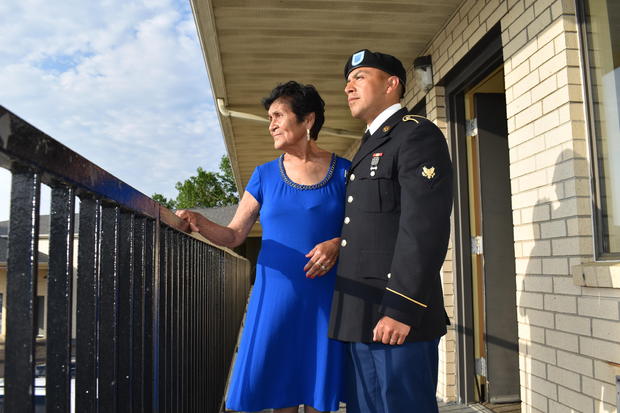 Worried about a disruption to his professional career as an immigration lawyer, Galindo did not want her son to join the Army. Camilo Montoya-Galvez

Over the last 18 years, Vargas has tried several times to join the armed forces. He was finally allowed to enlist last year after marrying a U.S. citizen and gaining permanent residency in 2017. Before he obtained a green card, the now 35-year-old Army engineer was shielded from deportation by the DACA program — which hangs in the balance as the Supreme Court considers whether to allow the Trump administration to terminate it.

Like his siblings, Vagas grew up as an undocumented immigrant in New York City. In 2011, he passed the New York State bar exam after graduating from City University of New York Law School. His application to the bar the following year, however, was rejected based on his lack of legal status by the bar’s Committee on Character and Fitness, which referred his case to the New York State Supreme Court.

After a three-year legal fight, the court, in a precedent-setting ruling, voted unanimously to approve Vargas’ application in 2015. He was sworn in the following year, becoming New York’s first openly undocumented lawyer. During this time, he also established himself as a nationally recognized advocate for immigration reform — testifying before Congress, launching an advocacy group and serving as a Latino outreach strategist for Vermont Sen. Bernie Sanders during the 2016 campaign.

Before enlisting, Vargas represented several clients in immigration cases and worked as senior counsel in the immigration committee of the New York City council. 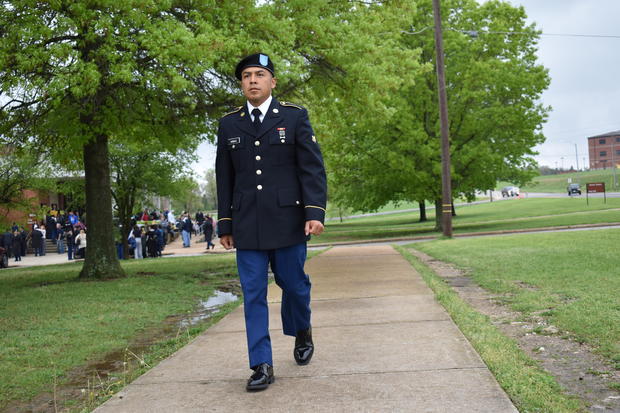 Although he knew that military service would disrupt his legal and advocacy work, Vargas said it was very important for him to fulfill a promise he made to himself years ago. He said some former military officers advised him to wait until he become a naturalized U.S. citizen and enlist in the Military Academy at West Point — one of his aspirations in high school — to graduate as a commissioned officer and avoid the arduous boot camp training.

“For me, it was not just being an advocate as a civilian, but also to really put my money where my mouth is and go through the experience of what soldiers go through,” he said.

Not G.I. Joe or Captain America — “just an everyday American”

For Vargas, the diversity of his graduating class epitomizes one of his primary reasons for joining the Army: to elevate the stories of immigrants in America who have answered the call to arms.

For centuries, immigrants have served in the U.S. military, with many of them placed on a pathway to citizenship because of their service. During the Civil War, 369 immigrants who fought for the Union were bestowed the Medal of Honor for their bravery. More than 13,000 non-citizen members of the U.S. armed forces deployed in the Pacific and European theaters were naturalized during World War II. One of the first U.S. servicemen killed in the war in Iraq was Cpl. Jose Gutiérrez, a young undocumented immigrant from Guatemala who received U.S. citizenship posthumously.

Through his enlistment, Vargas also hopes to push for reforms to allow immigrants covered under DACA and those who are undocumented to serve in the military. Only U.S. citizens, permanent residents and nationals of three Pacific territories are eligible to enlist in the armed forces. Vargas successfully lobbied the Obama administration to allow some DACA recipients to enlist through the Military Accessions Vital to National Interest (MAVNI) program — which is designed for foreign nationals with critical skills — but the initiative has been under review since 2016 because of national security concerns and the Pentagon has stopped accepting new recruits. 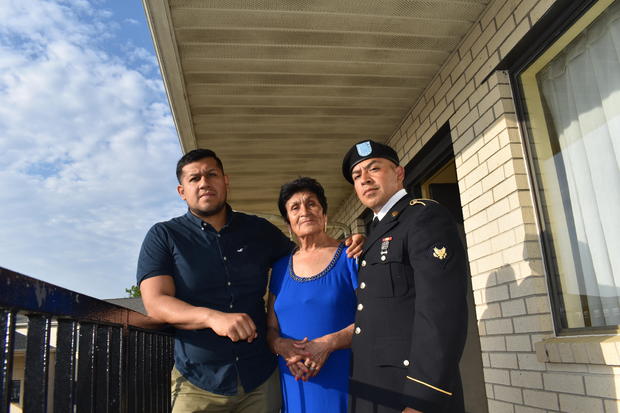 Carlos, Vargas’ brother and a DACA recipient, has also wanted to join the military since his teenage years, but has not been able to do so because of his immigration status.  Camilo Montoya-Galvez

Carlos, who sees his older brother as a “role model,” has also wanted to join the military since his teenage years, but has not been able to do so because of his immigration status. “If the policy was to change tomorrow, I would definitely enlist,” he told CBS News.

But if no policies change within two years, it will be difficult for Carlos to enlist, since the age cut-off for most military programs is 35. Still, he said he is proud of his brother’s accomplishments and perseverance. “I’m happy that one of us was able to do it.”

Vargas has another reason for serving in the military: to help his mother legalize her status. He has already filed paperwork to allow her to eventually obtain a green card through a little-known USCIS policy known as “Parole in Place.” The policy, derived from the Immigration and Nationality Act of 1965, allows certain undocumented family members of U.S. service members to apply for permanent residency without having to go back to their native country and possibly face a three or 10-year bar from reentering the U.S. 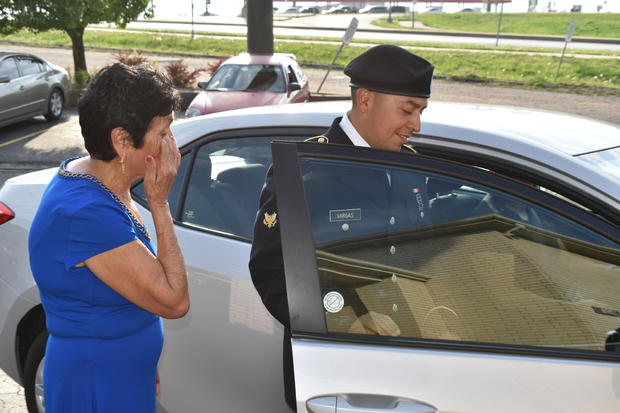 Vargas and his mother bid farewell as he prepares to return to the base at Fort Leonard Wood after a short leave to have dinner with family. Camilo Montoya-Galvez

Vargas’ feat has already received praise from Illinois Sen. Dick Durbin, the second-highest ranking Democrat in the Senate and one of the most vocal backers of legislation to protect young undocumented immigrants from deportation. Durbin invited Vargas to testify to Congress in 2010, and they have worked together on various issues in the years since.

“I am so proud of Cesar for fulfilling his lifelong dream,” Durbin told CBS News. “I will continue fighting to pass the Dream Act — as I have for the past 19 years — so that other Dreamers can serve beside Cesar in defense of our great nation of immigrants.”

After graduating boot camp, Vargas began his specialized training as a chemical, biological, radiological and nuclear (CBRN) specialist — a program in the Fort Leonard Wood base which will last until the summer. He will then continue training, but in New Jersey, where his assigned reserve unit is based. He is slated to serve a 6-year term in the Army.

Just as he fought to become one of the first openly undocumented attorneys in the country, Vargas hopes to set another precedent through his service.

“My story can be seen as a story not of G.I. Joe, not Captain America, but just an everyday American and immigrant who is here serving their country and giving back — and really honoring that tradition of immigrants in our military,” he said.