How one major ski resort works to keep avalanches under control

Sixteen people have died in avalanches across the Western U.S. so far this year. At North America’s largest ski resort, Whistler-Blackcomb, in British Columbia, the ski patrol uses a variety of tools — including helicopters and explosives — to keep everyone safe.

Recent snowstorms there have filled the mountain’s many avalanche-prone areas with unstable snow. So at 6 a.m., at the base of Whistler Mountain, avalanche forecaster Anton Horvath and his dog, Zeus, head uphill to start their day.

“We’ve got over 200 slide paths on Whistler Mountain alone,” Horvath told CBS News’ Carter Evans. “So after a storm cycle, it takes us at least a couple of hours to get everything open.”

As a supervisor with Whistler Ski Patrol, Tracey Morrison and her team of 60 use a variety of methods to keep unstable snow from dangerously building up and breaking loose.

Evans asked, “How serious of a threat are avalanches here?”

“They can be a serious threat,” Morrison replied, “but that’s part of our main job, is being able to mitigate any kind of serious avalanche hazard.”

Before they deploy any of those tools, it all starts with science. Horvath has been monitoring a roped-off plot of what’s known as “snow study terrain” all season. He examines the devastating combination of gravity and snow that is every ski resort’s worst nightmare.

They hit the snowpack with explosives made out of PETN, or penthrite, each with the explosive force of a stick of dynamite. 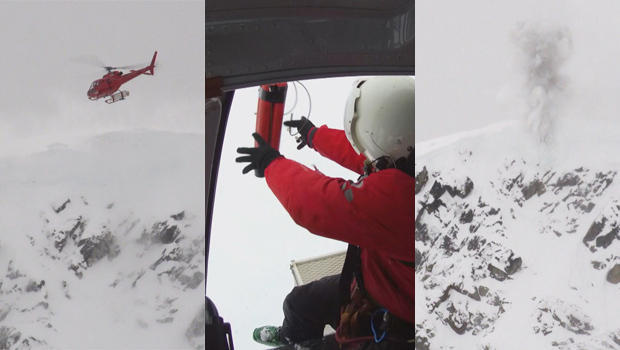 Explosives charges are dropped from helicopter at strategic points on the mountain top.

“What you can do is, you can get surgical with the helicopter; you can get that shot exactly where you want it,” said Doug MacFarlane, who oversees all operations at Whistler Mountain, and that includes the many facets of avalanche control.

Watch Carter Evans’ report in the video player above to see how small avalanches are created to avoid large ones.