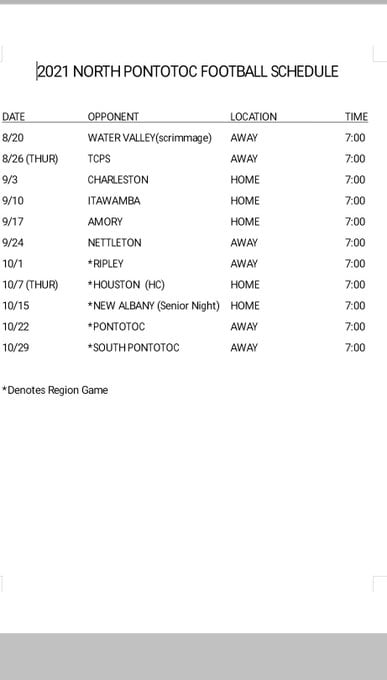 https://cdn.field59.com/WCBI/1628206745-c3e8e40623a014ca54d53b49a3526a0319ba2ac5_fl9-720p.mp4 ECRU, Miss. (WCBI)- Our High School Football Tour continues with North Pontotoc. The Vikings had a solid 2020 campaign and are hoping to build off that. They went 6-4 and their season ended in the playoffs. Head coach Andy Crotwell is feeling good heading into the fifth year of his tenure. “I was pleased with how the summer went,” Crotwell said. “Guys worked hard. We’re counting down the days until we can put helmets on and officially start practice.” North Pontotoc lost 13 seniors from last year’s team. All 13 were big contributors. “They were the first bunch I had from freshman to senior year here and that is always a difficult transition for a coach,” Crotwell said. “There has been good competition in several spots to find out who will go where.” “We’ve worked hard this summer,” senior RB Kalor Kirby said. “We have a lot of guys who are willing to work hard and be selfless.” Crotwell said the best way to overcome large turnover is to follow their motto that every year has a new identity. “You always accentuate your strengths and minimize your weaknesses and those change every year. We’ve got kids that are willing to work hard and pay the price that is needed to be paid for success. We just need to fill our way through and find out our best avenue for success,” Crotwell said. “We have a good year ahead of us. We’ve been building our chemistry as a team,” senior LB Leyton Walker said. The skill position guys on offense have impressed Crotwell. He has liked the way safeties have flown to the ball and calls the two returning linebackers his safety blankets. North Pontotoc’s season gets started August 26th against TCPS.