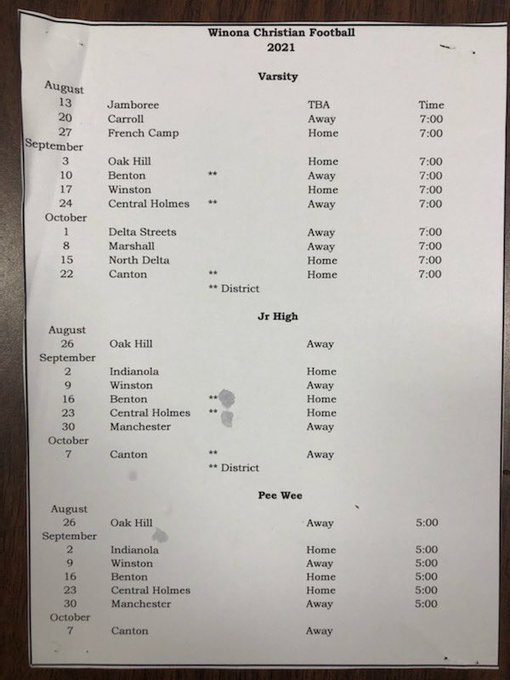 https://cdn.field59.com/WCBI/1627847525-ce3ca66b1409997f5e31b08266c92d748a597564_fl9-720p.mp4 WINONA, Miss. (WCBI)- Junior Graham is entering year six as Winona Christian’s head football coach. He has built something special there, and his team is coming off a ten-win season. Graham has been impressed with his guys’ approached to the off season, despite the challenges they may face this year. “We’ve had a tremendous summer. They have been here daily, like a sponge, because of all the new faces we have with either graduation or the transfer portal,” Graham said. The Stars lost 11 seniors from last year. They’re coming off back-to-back years making it to the Final Four. While the team will look different, the guys feel obligated to replicate recent success “This group of kids here don’t want to let that tradition down,” Graham said. “They want to grow as players with the opportunity to advance the football team in that second season.” One of the position groups that has a lot of starters returning is the offensive line. They have three returners. They’re going to have an even taller task this year, but they’re up for the challenge. “They have a lot to hold down,” senior linebacker Lane Beckwith said. “I believe they can do it, they are a bunch of big guys and they can go with it.” “The downside is they also will have to play defensive line. They haven’t had to in the past. Usually we don’t have the o-lineman play both ways but this year it is a necessity,” Graham said. Graham says his team is primed for success because of their mentality “We don’t judge anything based on previous years here at Winona Christian. Every kid has a new slate because it’s a new year.” “I think the positive mindset and not worrying about what we lost last year or what we’re getting this year will help,” senior offensive lineman Hunter Smith said. Graham believes the obstacles make the job more rewarding. “Why we coach is the element of surprise. Being around kids who want to learn and grow in the new position is a battle for us as coaches but it is also why we do what we do.” Winona Christian opens its season August 20th at Carroll.

A Columbus man wins WCBI's 2021 Crank It Up car giveaway

Traveling saxophonist is trying to inspire people to learn to play