Kermit, W.Va. — “Anyone here know someone who’s been caught in the grips of addiction?”

Nearly every hand in a fire station in this tiny West Virginia town shot up in response to the question posed by Sen. Elizabeth Warren of Massachusetts. Not many presidential candidates pass through Kermit, but Warren came to tout her $100 billion plan to combat the opioid crisis that has devastated communities across the country.

Kermit, with a population of about 400, is deep Trump country. Four out of five voters in rural Mingo County cast their ballots for President Trump in 2016. But the scourge of opioid addiction is as bad here as it is anywhere else — and residents feel forgotten.

The small town made national headlines several years ago when a single drug manufacturer was found to have delivered more than 9 million pills to a local pharmacy over the course of just two years.

On Friday, a dozen locals in full Trump garb stood watch in a nearby parking lot while about 150 people listened to one of the most progressive Democratic candidates in the race discuss her plan to devote billions of dollars to address the crisis. Those who attended were hopeful, but wary of being let down by lofty promises from an out-of-state politician.

“Is the money going to go to the bigger cities like Huntington and Charleston and places like that, or is it going to come here to us where we can make a difference?” asked Kermit Fire Chief Tommy Preece, who lost his brother to an opioid overdose.

That’s what brought Warren to Kermit: to show she wants to fight addiction in the areas of the country where it has done the most damage. Warren’s proposal calls for $2.7 billion each year to go directly to the cities and counties hit hardest by opioid deaths, places like Kermit, where the local government could then make a plan tailored specifically to its needs. Her plan would provide communities in West Virginia about $24.6 million a year to address opioid addiction.

“We got to go community by community to fix this,” Warren said. “The deliberate design of this is to bypass the state government so you don’t have another level of politics, and to try to keep it simple.”

Other voters gave the Massachusetts Democrat their attention simply because she showed up.

Kevin Southers of nearby Logan County voted for Mr. Trump in 2016, but said he would go to an event any presidential candidate held in his area. “Nobody stops here,” he said.

Like several of her other policy proposals, the Massachusetts senator’s opioid plan relies on the success of her “ultra-millionaires tax.” She has long painted the American economy as being controlled by the rich and giant corporations in Washington and Wall Street.

“I believe in an America that works not just for those at the top, but for everyone else, and that’s why I’m here in Kermit,” she said.

The stop kicked off Warren’s first campaign trip to West Virginia and Ohio, states which Mr. Trump carried in 2016. They also have the highest two rates of fatal opioid overdoses in the country.

At events in the more Democratic-leaning Cincinnati and Columbus, however, she drew crowds of voters who generally wavered between supporting her and Vermont Sen. Bernie Sanders. For those voters, Warren has tried to differentiate herself by presenting fully-detailed policy proposals. 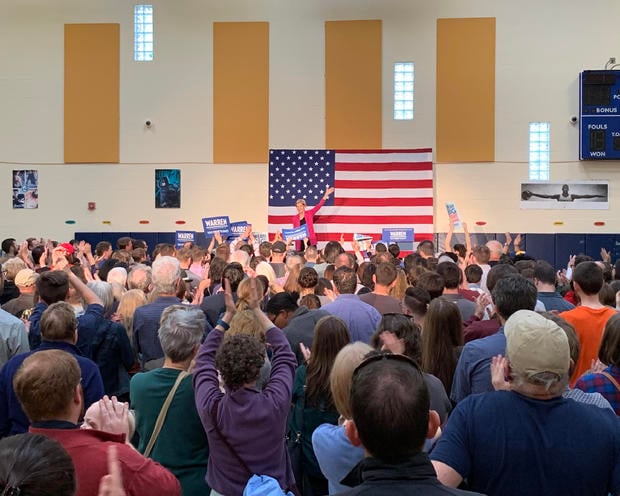 “Her stance is decisive and bold. She has research and resources to back her ideas,” said Nathan Casian-Lakes of Cincinnati.

Warren returns to the trail Monday with a town hall event in Philadelphia.