If you decide you do not want to read this article about Kathy Griffin, the comedian wants you to know she’d understand. But for her part, Griffin has gotten pretty used to rejection from a certain segment of the U.S. population. “I’m Hanoi Jane, you know? I get it. This photo is gonna be with me forever, no matter what I do.”

The photo, now infamous, was taken in 2017, and featured Griffin holding a mask of President Trump dripping with what appeared to be fake blood. (It was actually ketchup.) “Well, I didn’t have any fake blood. I usually don’t stock it!” she laughed.

Griffin said the photo was meant as political satire, but that didn’t stop all hell from breaking loose. The president reacted, tweeting: “Kathy Griffin should be ashamed of herself. My children, especially my 11-year-old son Barron, are having a hard time with this. Sick!”

In 2017 Kathy Griffin posed with a bloody replica of President Donald Trump’s head. The response was sobering.  Tyler Shields

Even Griffin’s 98-year-old mother was upset with her: “She called me up and she said, ‘I thought I heard that you were in al Qaeda. Why wouldn’t you join another club?'”

Griffin was used to controversy, but this was on a whole other level. “I never in my lifetime thought anything like this could happen,” she said.

Caught off-guard by the visceral response, she went into crisis management mode, releasing this video in which she said: “I sincerely apologize. I am just now seeing the reaction to these images. I’m a comic. I crossed the line. I moved the line, then I crossed it. I went way too far.”

But the damage was done. Her comedy tour was cancelled; she lost her endorsement deal with something called Squatty Potty; and she found herself under investigation for conspiracy to assassinate the President of the United States – a charge that potentially carries a life sentence.

“My little story is historic,” she said. “Whether you like it or not, it’s the first time a sitting United States president has used the full power of the Oval Office, the first family, the right-wing media and, more importantly, two departments within the Department of Justice to open an investigation on a private citizen who did nothing wrong. Didn’t violate he First Amendment, didn’t break the law.”

At a press conference, Griffin was emotional when she spoke of Mr. Trump’s, and the government’s, response: “To be honest, he broke me.”

Griffin says her name ended up on the no-fly list, and CNN fired her from her long-running gig co-hosting their New Year’s Eve special with Anderson Cooper. “I really did love Anderson and I really loved doing that gig. And it was a lot of fun. And, you know, they just couldn’t get over it.”

Correspondent Luke Burbank asked, “What would you be without your comedy?”

“I thought about that a lot, and I thought about it immediately. So, one of the first things I did was I wrote a couple of scripts that I’m not even in. I thought, ‘I can do that,’ you know? And I thought, ‘Well, maybe somebody will buy a script from me if it doesn’t say Kathy Griffin.'”

But even without her name attached, she said there was little interests. Now, this is the part of the story where a lot of people as rich as Kathy Griffin would have just gone into early retirement. But not Griffin. “I thought: ‘Well, I know how to be funny, and I know how to get people to buy tickets.’ Because I’m pretty sure there’s a whole bunch of countries overseas that really don’t like Trump. And that’s how it all started.”

So, she hit the road again, but only after taking control of her business, learning how to book every element of it herself, from renting the theaters, to marketing the shows, to hiring the ushers. “I think it was 13 countries and 26 cities. And then I thought, ‘Okay, I’m onto something.'”

Her tour grossed more than $4 million. “And yet, I don’t have a single day of paid work on television ahead of me for the rest of my life,” she said.

But she’ll always have the stage. Her world tour became the basis for her new comedy special, called “Kathy Griffin: A Hell of a Story.”

Griffin has won all kinds of awards for her TV work and comedy specials. But she’s still looking for a distributor for this new film, which may serve as a reminder that her life might never go back to how it used to be. 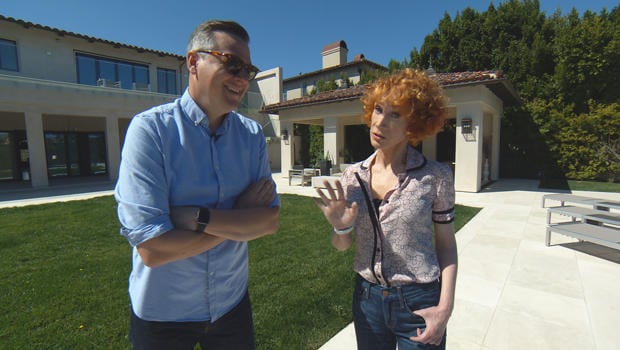 Burbank asked, “Are you still getting death threats to this day?”

“Yes, online and in person,” Griffin said. “I was in London a month ago and I had a driver who took myself and my assistant from London Heathrow to the hotel, and he recognized me from the photo and he said that he was from Morocco and that if we were in Morocco he would cut my tongue off.

“So, that was a long drive!” she laughed.

“What kind of rating did you give that driver?” Burbank asked.

“I called the president of the company and had him fired!” she replied.

Despite what she’s been through (or what some might argue she put herself through), Griffin says she doesn’t want anyone feeling sorry for her. After all, she does live in a $10.5 million mansion in Bel Air, California that she paid for in cash. “It’s heaven. I’m not gonna lie. It’s heaven.”

And she’s comforted by two rescue dogs: Olivia Benson and Elliot Stabler. “They have been game changers. Like, I know I sound really corny, but I do everything wrong: I let them sleep in bed with me, I cuddle with them, and I feel their little heartbeats against me, and they’ve really gotten me through, honestly.”

And then there’s the therapy, too. “Oh, yeah. I go to therapy as much as I can. I’ve been doing that since I was 18. I mean, the therapy sessions were, like, how to just put one foot in front of the other.”

And, she says, it was fellow comedian Jim Carrey who called her out of the blue with some much-needed advice: “This phrase has always stuck with me. He goes: ‘You’re going to take as long a time as you need to process it, and then you’re going to put it through your Kathy Griffin comedy prism and you’re gonna make the story funny and relatable, and you’re gonna go tell it.’ So thank you, Jim Carrey!”

Now that there’s some light at the end of the tunnel, Kathy Griffins says, at 58, she’s done apologizing.

Burbank asked, “If you could click your heels together and go back and just like, at the end of the photo shoot before the mask came out, could it just been like, ‘Let’s call it a day,’ would you?

“No,” she replied, “’cause I’ve learned so much. I think a lot of people would love it if I said, ‘Oh, I wish I had never taken that picture. I wish I had never cursed. I wish I had never made this comment or that comment.’ But the most important thing that I hope people see is that, long after I kick the bucket, they see the crazy red-haired lady didn’t go down.”

Or, as she told the audience on tour, “One of the things I want you to take away from tonight [is] I’m Kathy Griffin and I never learn my lesson!”