Washington — Three months after immigration authorities carried out a massive roundup of nearly 700 undocumented workers at food processing plants in Mississippi, lawmakers grilled one of the officials who oversaw the operation over the decision not to warn local stakeholders, the lack of enforcement actions against employers and the separations of children from immigrant parents who remain detained.

Pressed by four Democratic lawmakers during a House Homeland Security Committee field hearing in Tougaloo, Mississippi, on Thursday, Immigration and Customs Enforcement (ICE) special agent in charge Jere Miles said the agency doesn’t know how many children remain separated from parents who were apprehended during the sprawling operation in early August.

“Do you realize how indicting that answer is?” Texas Congresswoman Sheila Jackson Lee asked Miles, who faced fierce questioning throughout the hearing.

House Homeland Security Committee Chairman Bennie Thompson and a panel of witnesses in the foreground during a field hearing at Tougaloo College in Jackson, Mississippi, on Thursday, November 7, 2019. AP

In the hours and days following the operation targeting seven workplaces across six different Mississippi cities, hundreds of those apprehended were released to continue their immigration proceedings outside detention — but many were not. Miles said he did not know how many of the 680 workers initially apprehended remain in detention.

Congressman Al Green, also a Texas Democrat, asked Miles whether the agency deliberately planned to separate parents from their children as part of the operation. Miles conceded that officials were aware that many of the workers would likely have children, but he pushed back on the notion that his officers separated families, saying the objective was to “arrest people who were violating federal law.”

For many children in the Mississippi communities where the August 7 raids took place, the operation fell on their first day of school — forcing schools and authorities to scramble to house dozens of concerned and sobbing children whose parents had been apprehended. Miles testified on Thursday that he personally was not aware that August 7 was the first day of school in many districts in the area.

“Babies ought not to be separated from their parents,” Green said to a fervent applause. 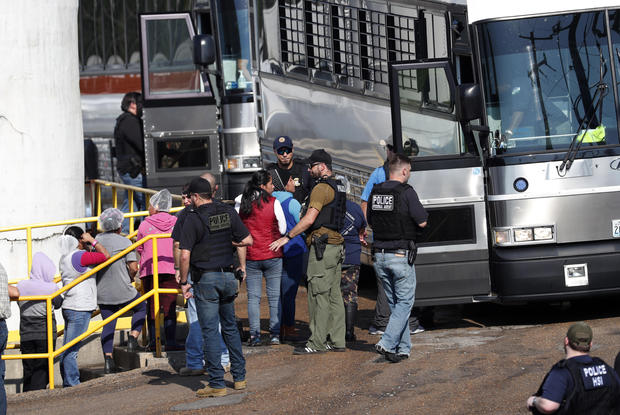 Handcuffed female workers are escorted into a bus for transportation to a processing center following a raid by U.S. immigration officials at a Koch Foods Inc. plant in Morton, Mississippi, on Wednesday, August 7, 2019. AP

The lawmakers also interrogated Miles about a common refrain among advocates and Democrats: that undocumented immigrants are apprehended and potentially deported, while the people and companies who hired them typically evade prosecution for employing unauthorized workers.

Researchers at Syracuse University in New York found that between April 2018 and March of this year, just 11 individuals were criminally prosecuted for knowingly hiring unauthorized workers, and only three of them were sentenced to time in prison. No companies were prosecuted. During that same time span, more than 85,000 immigrants were prosecuted for illegal entry.

“You indicated that you wanted to take away the economic incentives. And you do that by coming in and taking the undocumented persons, have them do a perp walk, show some of that on television and then you can somehow deter persons,” Green said. “But you don’t have a perp walk for the employers. They don’t get arrested. You don’t handcuff them and take them away.”

Pressed by Green, Miles said no employer was arrested or detained as part of the operation. In his opening remarks, the ICE official said the investigation was ongoing and that his officers were still scrubbing through the 850,000 documents and 61 devices they seized during the operation. 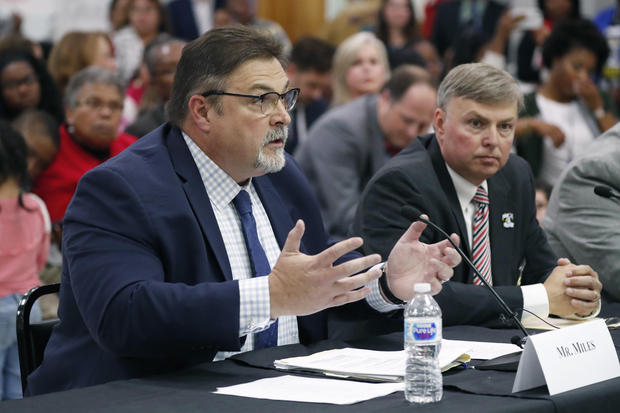 The other witnesses during the hearing detailed how all aspects of local communities were blindsided by the raids — from city hall and the sheriff’s office to school districts. William Truly, the mayor of the town of Canton, where a poultry processing plant was raided in August, said ICE intended for the roundups to be a “surreptitious clandestine act.”

“Without warning, notice or acknowledgment, ICE invaded the city of Canton,” Truly said, noting that he accidentally found out about the operation when a resident informed him that ICE agents were in town.

The African American mayor hailed his town’s Latino community, which he said was wrongly targeted by roundups: “The Hispanic population in the city of Canton are not gang members, they are not rapists, they are not murders, but folks who work and pay taxes, purchase goods, take care of each other and their families.”

His comments were echoed by fellow witness Mike Lee, the longtime sheriff of Scott County, home to several of the food processing plants and a burgeoning immigrant community.

“The feedback I have received from our citizens is that folks admire our Latino communities’ work ethic and their commitment to family,” Lee added. “In my role as sheriff, I do not believe Latino workers present a danger to our community. I base that on the fact that I have not seen a spike in crime as a result of Latino individuals living and working in our county.”

Lee said his office was “taken by surprise” by the operation. 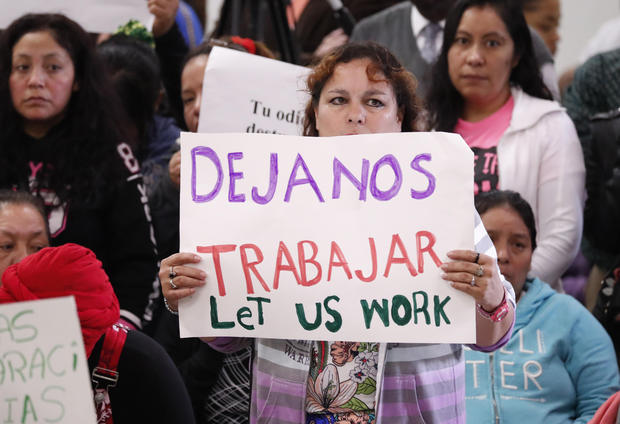 An attendee at the House Homeland Security Committee field hearing at Tougaloo College in Jackson, Mississippi, holds a sign written in English and Spanish, stating “Let us work,” on Thursday, November 7, 2019. AP

Asked about not notifying local authorities before operations, Miles said his agency does not have a policy to notify “anyone” beforehand. He read from a list of school officials who he said were contacted by ICE after the operation had been carried out, but he conceded that his agency failed to appraise at least one school of the situation, calling it an “oversight.”

Despite the criticism, Miles maintained throughout the hearing that the operation was effective and warranted as part of an effort by the administration to discourage people who they believe are economic migrants from heading towards the U.S.-Mexico border. “I absolutely believe it was a good deterrent,” he said.

But Congressman Bennie Thompson, the Mississippi Democrat who chairs the Homeland Security Committee, said ICE could conduct law enforcement operations without separating children from their parents.

“I would not take pride in a country that separated its children,” he said. “I know people have a job to do — and it’s a difficult job — but you can do it with compassion.”