Lawsuit seeks to halt deportation of Honduran family to Guatemala

New York — Lawyers and advocates are mobilizing to try to stop U.S. immigration officials from deporting a young Honduran mother and her two sick children to Guatemala, where the Trump administration has sent dozens of asylum-seekers in recent weeks as part of a controversial deal with the Central American country.

The 23-year-old migrant mother and her two daughters — a 6-year-old and 18-month-old baby — were apprehended at the U.S. border in Texas in December and are slated to be sent to Guatemala on Tuesday, according to court records. The family’s lawyers say the two girls, who have been sick and were recently hospitalized, are in no condition to be deported to Guatemala.

A group of lawyers, led by attorneys from the group ProBAR, which provides legal assistance to asylum-seekers, sued the government last week in U.S. District Court in McAllen, Texas. They asked the court to block officials from sending the family to Guatemala and to order Customs and Border Protection (CBP) to release them so the children can continue further medical treatment at a local shelter.

But the government said in a filing that it still plans to move forward with its plans to send the family to Guatemala on Tuesday, or whenever the mother and children have received medical clearance to travel.

The government says the three family members are set to be deported on Tuesday, or when cleared for travel by a doctor. U.S. District Court, Southern District of Texas

The 1-year-old girl has been undergoing treatment at a hospital near McAllen, but the government said she is expected to be released soon. The mother and the 6-year-old, the government said, do “not appear” to be “suffering from medical conditions that would prevent their removal” to Guatemala.

But the family’s lawyers disagree with this assessment and argue that continued detention and potential deportation are “inadvisable and dangerous” because of the children’s health. The 6-year-old has been diagnosed with the flu, and the infant has a fever and diarrhea, which the lawyers say stems from “inadequate” food and “unsanitary” living conditions while in CBP custody.

The woman’s husband and the children’s father, who has been in the U.S. for more than a year, is pleading with the government not to deport his family.

“If they return my family to Honduras, I’m expecting the worst. My daughters and my wife could be harmed,” the 26-year-old father told CBS News in Spanish. “And Guatemala is almost the same or worse because they don’t know anyone there.”

CBS News is not disclosing the names of the family members since they are subject to ongoing immigration proceedings. The three are identified by initials in court filings.

CBP did not respond to a series of questions about the family’s case, including whether the family is still going to be processed for removal to Guatemala on Tuesday.

If the family is deported to Guatemala, it will join 187 asylum-seekers from Honduras and El Salvador — including more than 50 children — who have been sent there by the U.S. under an “Asylum Cooperative Agreement” with the Guatemalan government. Those subject to the agreement are denied access to America’s asylum system at the U.S.-Mexico border and required to choose between seeking refuge in Guatemala or returning home.

The deal has elicited strong criticism from advocates, who point to Guatemala’s skeletal asylum system and the fact that hundreds of thousands of Guatemalan families have trekked north to the U.S. southern border in the past two years, many of them fleeing endemic violence and extreme poverty.

Last week, the American Civil Liberties Union and other groups filed a lawsuit to try to block the administration from enforcing the agreement with Guatemala, as well as similar deals the U.S. forged with Honduras and El Salvador.

“This would break anyone’s heart” 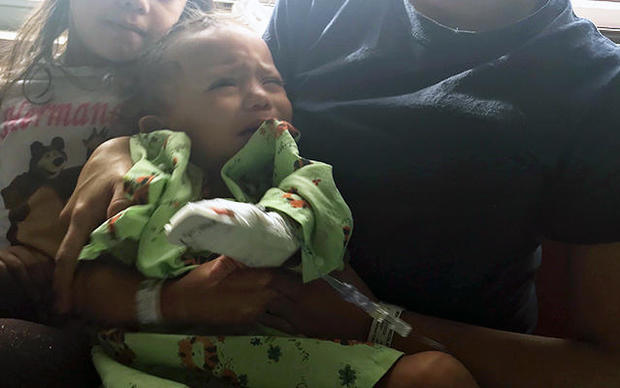 The 1-year-old girl receiving medical treatment, with an IV in her arm.

The mother fled Honduras with her daughters in September 2019 after a gang demanded that she pay a “protection fee” for her small grocery store, according to her husband. He said the gang made several threats.

The mother and her children reached the U.S.-Mexico border in late December. During their first attempt to cross, they were kidnapped by an unknown group, the father said, noting that those who kidnapped his family asked him to pay $200 per person.

After pleas from the mother, the family was ultimately released, the father said. Two days later, a day before New Year’s Eve, the three again tried to cross the border and presented themselves to Border Patrol agents. They were then sent to the CBP facility in Donna, Texas, where officials detain migrants who the government intends to send to Guatemala or who are deemed ineligible for asylum under a sweeping restriction allowed by the Supreme Court.

Despite expressing fear of persecution, the mother was not referred for a so-called “credible fear” interview, the first test migrants must pass to pursue asylum claims in the U.S. Instead, the family was given what their attorneys called a “Hobbesian choice.”

“[Officials] presented the mother with a Hobbesian choice: return to Honduras from which she fled with her children in fear for their lives or be sent to Guatemala where she has no family, friends, contacts or job prospects and where she and her children likely will suffer from the same violence that compelled them to leave Honduras,” a filing by the family’s lawyers reads.

The father said his wife described the same occurrence over a phone call this week. “Those were the only options,” he added. “They were not given an option to ask for asylum here in the U.S.”

Fearing a return to “known threats” in Honduras, the mother chose to be sent to Guatemala, the family’s lawyers said. The government said the mother then underwent a so-called “threshold screening” with an asylum officer who determined she was not exempt from the U.S.-Guatemala deal.

Like other migrants subject to this policy, the mother did not have access to counsel before or during the secreeing. One of the family’s lawyers said she tried to talk to her clients at the CBP facility in Donna, but was denied entry.

In their lawsuit, the lawyers also said the family’s continued detention, which has now reached more than 20 days, violates requirements set forth by the Flores Agreement, a court settlement that governs the care of children in U.S. immigration custody. The agreement mandates the government to release children from custody as expeditiously as possible and to detain them in the least restrictive settings as possible.

The government in its legal filing denied that the family’s continued detention violates the Flores Agreement.

The children’s father said the family’s detention and imminent deportation to Guatemala has taken an emotional toll on his wife.

“She’s very bad emotionally. I know her. She’s a very happy person. I’m also a very happy man,” he said. “But with this situation — I don’t cry, because I’m ashamed, but when I’m alone in my bed, I tear up looking at photos of them and us together in Honduras. This would break anyone’s heart.”