COLUMBUS, Mississippi (WCBI) – Warmer weather takes hold for the rest of the week as potentially multiple rounds of rain move through as well.

TUESDAY: Early showers will eventually shift into Alabama, leaving a partially clearing sky for north MS in the afternoon. It will be more comfortable as well as temperatures reach the upper 50s to near 60 degrees.

WEDNESDAY: Temperatures will start just above freezing with sunshine, but clouds will increase by afternoon. It will still our best weather day this week with highs in the middle 60s.

THANKSGIVING DAY: The day looks to start mostly dry, but rain will steadily build in from the west. Widespread showers are expected in the afternoon with heavy rain overspreading the region by evening. Rain totals of at least an inch are likely, with pockets of higher totals likely. 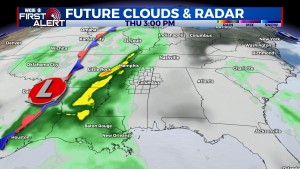 BLACK FRIDAY: Rain could be widespread for shoppers early, but we should catch a break in the afternoon as the main rain axis moves east of the region. Temperatures will stay near average in the middle 60s.

WEEKEND: Another round of rain and potential storms is possible Saturday as the final wave of energy slides through the region. The best chance of this activity looks to be before lunch Saturday, but stay tuned for any changes. Sunday looks dry with temperatures in the 60s.