COLUMBUS, Mississippi (WCBI) – Thursday’s storms are out, and only a few stray showers or storms are expected Friday.

FRIDAY: Clouds will gradually decrease for most today, though a cloud canopy could hang on longer for areas southeast of Columbus to Louisville. A few showers or storms could redevelop later in the day, but most places will stay dry. High temperatures will be split – hotter with mid to upper 90s in the north, lower 90s south. 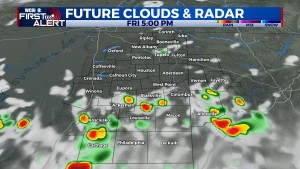 WEEKEND: A remnant feature from Friday’s storms to the south may help spark a few showers Saturday afternoon as it drifts north and weakens. Extra clouds associated with this feature may hold highs back in the low 90s. Sunday brings the return of “normal” July temperatures with highs in the middle 90s.

NEXT WEEK: Monday starts the week dry and quite hot with highs in the upper 90s. Beyond Monday, several weak fronts will attempt to “break” down the ridge over the Southeast. Eventually, rain chances look to increase late in the week but should stay isolated Tuesday-Thursday.

Seasonal Temperatures On the Way