WEDNESDAY: Expect plenty of hazy sun today with highs in the 90s to near 100 degrees for most spots. A heat advisory remains in effect for the entire region, meaning heat indices could exceed 105 degrees at times from 11a-8p.

THURSDAY: A weak front drops in from the north and could spark a couple showers or storms in the afternoon. Otherwise, highs stay in the middle 90s with heat indices approaching 105°. 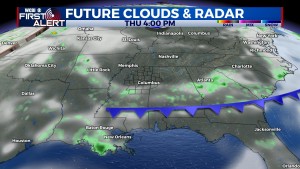 FRIDAY: Behind Thursday’s front, less humid air will take hold and make the heat a little more tolerable. Still, highs will top out in the middle 90s under a sunny sky.

WEEKEND: The major heat rebuilds across the region Saturday as highs approach 100 degrees yet again. Sunday looks to stay mostly dry, warm, and humid ahead of a stronger front.

NEXT WEEK: Said stronger front should arrive Monday and bring appreciable rain chances to the region. Afternoon high temperatures should drop back into the upper 80s as well for Monday and Tuesday.