A dangerous and deadly heat wave is gripping nearly more than half of the U.S. Tens of millions are set to broil in record-setting high temperatures this weekend, with heat advisories or warnings in effect from the Midwest to much of the East Coast. The heatwave is already blamed for at six least deaths.

Temperatures are expected to range from the mid 90’s to the triple digits, with the heat index making it feel as hot as 100 to 115 degrees.

Washington, D.C., joined dozens of cities in declaring a weather-related emergency ahead of record-breaking temperatures expected throughout the weekend.

Dr. Christopher Rodriguez, the district’s director of Homeland Security and Emergency Management Agency, said officials will be monitoring the dangerous temperatures from an operations center.

“This is going to be one of the most severe heat events that we’ve had in the last several years,” Rodriguez said.

While midwestern cities like Milwaukee and Chicago will be affected, the East Coast is expected to take the brunt of it. Temperatures are expected to range from the mid 90’s to the triple digits, with the heat index making it feel as hot as 100 to 115 degrees.

The National Oceanic and Atmospheric Administration warned the heat can be a silent killer. Doctors are warning to watch out for signs of heat illness. Symptoms can include headache, muscle cramps, nausea. another sign is a lack of sweating.

Millions across the country hit with dangerous heat

Twenty-one children have died so far this year after being left in hot cars — a risk that rises when the temperature rises. Chicago’s Lurie Children’s Hospital demonstrated how hot a car can get. The temperature rose from 96 degrees to 124 in half an hour.

The soaring heat is especially dangerous for outdoor workers. To keep Chicago cool, the city has installed hundreds of green alleys, made with materials that absorb less heat than black asphalt. New York City also has a program that paints roofs white to reflect the sun.

The hot temperatures extended north to New England, where temperatures are expected to hit 100 degrees in Boston. The city has only had temperatures over 100 25 times in the nearly 150 years of record keeping in Boston, about once every six years on average, CBS Boston reported.

The record temperature for July 20 is 99 degrees.

The National Weather Service has issued an “excessive heat warning” for most of southern New England on Saturday, expecting heat indexes near 110. Nantucket was the only area not under the warning.

A new study from the Union of Concerned Scientists that found by 2050, the number of days where the heat index hits 105 will triple. By the start of the next century, Boston could have the same number of extreme heat days as Columbia, South Carolina does now.

While heat waves may become more frequent and more extreme due to climate change, it’s not possible to say whether this particular heat wave is the result of climate change.

“In the case of OZY Fest, we do have in our contract for either rain events or extreme heat events. We do have the right of exercising cancellation if the heat index exceeds 105 [degrees],” NYC Park Commissioner Mitchell J. Silver said in a statement Friday. “We determined for both days, as we got updated information, that was going to be the case.

According to Pulaski County Coroner Gerone Hobbs, Petrus died Thursday night at a North Little Rock hospital. He says Petrus had worked outside all day at his family shop, and that his cause of death is listed as heat stroke.

Petrus was a University of Arkansas walk-on who played alongside Razorback greats Darren McFadden and Felix Jones and later earned all-Southeastern Conference honors. He was drafted by the Giants in the fifth round in 2010 and had a three-year NFL career, winning a Super Bowl with New York in his second season. 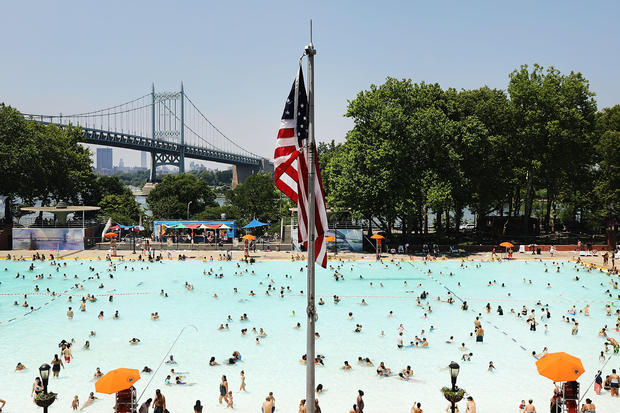 People enjoy a hot afternoon at the Astoria Pool in the borough of Queens on July 2, 2018 in New York City. Spencer Platt / Getty

As part of the mayor’s executive order, all office buildings 100 feet and taller must set their thermostats to 78 degrees to conserve energy until Sunday night. At a press conference on Friday, de Blasio said this was the first time this has been done.

The city’s cooling centers will be open from 8 a.m. to 5 p.m. and in some cases, there will be extended hours, de Blasio said.

The New York City Public Library announced it will open decided to open five additional branches in the Bronx, Manhattan and Staten Island on Sunday, July 21.

Biscuit baked in car in Nebraska 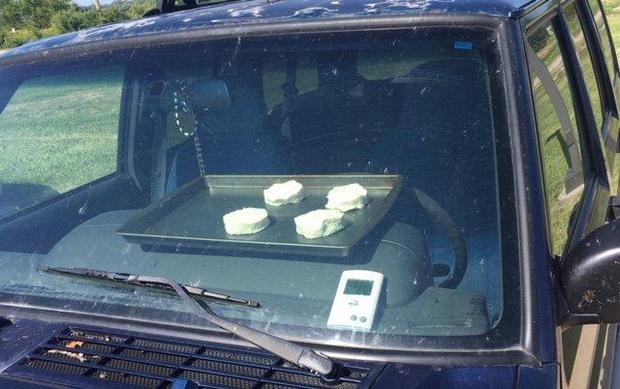 The National Weather Service in Omaha, Nebraska, baked biscuits in a parked car using only the heat of the sun. The agency put four biscuits on a baking sheet, then left them on the dashboard of a parked car in the sun to begin its experiment.

Over the course of the next eight hours, the weather service shared updates on how the biscuits were doing.

After about 45 minutes, the biscuits began to rise, and after an hour, the pan temperature reached 175 degrees. “This is a good time to remind everyone that your car does in fact get deadly hot,” the agency tweeted. “Look before you lock! On average, 38 children die in hot cars each year. Don’t be a statistic!”

At the five-hour mark, the agency reported the top of the biscuits were baked, and even the temperature in the shady part of the car had reached 144 degrees.

“And after nearly 8 hours in the sun, the outside of the biscuit is actually edible,” the agency wrote in its final update. “The middle is still pretty doughy though. The max temp on the pan was 185!”