Players on the U.S. women’s soccer team, one of the most successful female sports teams in American history, argue they have not been treated the same as the men’s team.

On Friday a federal judge threw out the equal pay claim in their lawsuit, though he will allow them to move forward to fight on claims of discrimination (under the Civil Rights Act) with regards to travel, medical and training support services. A trial is set for June. [Read the judge’s 32-page decision.]

Reacting to the decision on “CBS This Morning” Monday, Megan Rapinoe, the team’s co-captain, said she was “shocked, to be honest, very shocked, and of course disappointed in this. I didn’t feel like the ruling really captured the heart of what we’re after.”

“The argument that we’ve earned more over the course of the time we’re talking about than the men’s team really misses the whole point. We’ve won two World Cups, and we’ve won basically every game that we’ve played, darn near. So, to have that compared in that way and sort of missing the fact that we’ve outperformed the men’s team, just to say that we earned a little bit more money, I feel like really misses the heart of the gender discrimination suit that we brought against the federation.”

Dokoupil asked, “The judge is saying that the women could have negotiated a different contract but chose not to, and the men negotiated the one that they did. So, you can’t now go back and say, ‘Hey, we wish we had done it differently.’ That’s his position. What’s your response to that?”

“As I’m sure many women who have been in our position can sympathize with, we did ask for the same contract; we asked for the same amount of money, and [we were] repeatedly, and in no uncertain terms, told that was not going to be possible. So, for the ruling to sort of imply that we were peachy-keen with the original deal that we got and now that we’re understanding that we could have had more money and so we’re going back on it, is very frustrating for us. 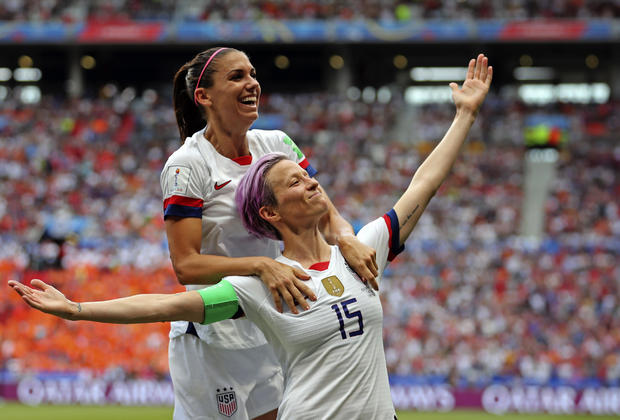 U.S. teammates Megan Rapinoe, right, and Alex Morgan celebrate after Rapinoe scored the opening goal from the penalty spot during the Women’s World Cup final soccer match between the U.S. and The Netherlands, in Lyon, France, on July 7, 2019. Team USA won the tournament. Francisco Seco / AP

In a statement to CBS News, the U.S. Soccer Federation said, “We look forward to working with the Women’s National Team to chart a positive path forward to grow the game both here at home and around the world. U.S. Soccer has long been the world leader for the women’s game on and off the field, and we are committed to continuing that work to ensure our Women’s National Team remains the best in the world and sets the standard for women’s soccer.”

Dokoupil asked if the players would be interested in pursuing a settlement, given the federation’s statement that they are seeking a “positive path forward.”

“I think that we’ve been very transparent about our openness to a settlement,” Rapinoe replied. “Ultimately what we want to get to is something that’s fair and equal. And if that comes in the form of a settlement, we are definitely open to that. I don’t think anybody is dying to go into litigation or go to trial or go through a lawsuit. This has been a very arduous process for us as players, so we’re always open to that. But with that, we’re not going to settle; we know what we’re worth. We feel very strong in our case, even with this ruling. Maybe even stronger now. So, a settlement is always on the table. We’ll always have open ears to that. But it will be nothing less than equal.”

Dokoupil asked, “In these four years you’ve been having this fight, there have been changes atop the leadership structure of U.S. Soccer. There’s now a new president, Cindy Cone, a former member of the women’s national team. I’m curious, has she reached out to you as a fellow player to say, ‘Hey, let’s work out a deal’?”

“I’ve not heard from her since the ruling,” Rapinoe said. “We have had a conversation with her as players prior. But I know the kind of axe falls on the head of the president, and I think that Cindy has a very big job ahead of her. I don’t think we can let the board off, as well. I think that the board of directors has a huge decision-making role within U.S. Soccer, and they always have. So, I think they need to be a part of this conversation as well. And it needs to come from both Cindy, who’s obviously the figurehead, but from the board as well.

“And again, always open [for] that conversation. We are always willing to listen. But in the absence of something that truly is fair and equal, I’m not sure a ‘positive path’ is really what we’re after.”

Turning to politics, Dokoupil also asked Rapinoe about former Vice President and presumed Democratic presidential nominee Joe Biden, who on Saturday tweeted that, if president, he would push the U.S. Soccer Federation for equal pay or withhold their World Cup funding.

Last Thursday Rapinoe appeared in an Instagram video with Joe and Jill Biden, the day before he appeared on the MSNBC show “Morning Joe” to address allegations made by Tara Reade, a former Senate aide who said that in 1993 then-Senator Biden sexually assaulted her.

“No, it is not true,” Biden said. “I’m saying unequivocally, it never, never happened.“

Dokoupil asked, “Since you’ve been so closely aligned with him, and since he’s behind you in this fight for equality, what did you think of his reaction to those allegations and how do they affect the campaign?”

“I mean, I think all allegations of sexual assault need to be taken very seriously,” Rapinoe said. “You know, I welcome the media talking about it and welcome a full investigation. I think that any woman who comes forward deserves that.

“In terms of his support for the lawsuit, we welcome any and all support from both sides of the aisle. We have had a lot of support on both sides of the aisle across the political spectrum about this. I think that this issue goes beyond politics, it goes beyond partisanship. I think there is just an issue really of human rights and of what is fair and equal under the law.”