Virginia Beach, Va. — Hundreds of mourners packed a Catholic church Thursday to remember a married mother of three who was killed during last week’s mass shooting in a Virginia Beach municipal building. The funeral mass for Katherine “Kate” Nixon in Virginia Beach was among the first memorial services for the 12 people who died, ushering in the next phase of grief for this city on the Atlantic Coast.

“We hope that now she’s enjoying the Heavenly Father’s blessing,” Eric Vogt, pastor of St. Gregory the Great, said during the homily.

A program for the funeral mass showed a smiling Nixon, 42, with her husband and three children, ages 1, 6 and 13.

A look inside the memorial service for the victims of the Virginia Beach shooting. WTKR-TV

Nixon was a compliance manager in the city’s public utilities division. She had earned a civil engineering degree and was a strong advocate for women pursuing careers in that field.

Nixon was also a regular churchgoer, faithfully attending Tuesday Bible studies and Sunday Mass with her family. When she wished peace to parishioners around her in the pews, her sentiments were clearly genuine, Vogt said.

Matthew Lusich, a younger brother, said Nixon was the second oldest of eight siblings who became a natural leader in the family.

She met her future husband in Florida when she was still living in California. But she wrote him letters every day that were adorned with stickers of Disney characters.

Lusich said the entire family would later move Nixon to Florida, forming a wagon train of vehicles that traveled across Interstate 10.

“That’s how important Kate was to us,” he said.

Nixon and her husband eventually settled in Virginia Beach, where she put down deep roots. Lusich said he was inspired by his sister’s willingness to move away from Bakersfield, California, to pursue what she wanted out of life.

“That fearlessness and strength … showed leadership and inspiration to me,” he said. “If Kate can be fearless, I’ll be fearless like Kate.” 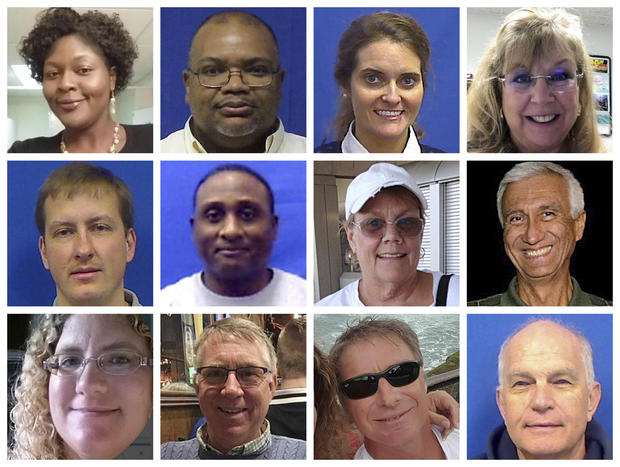 Services for other victims are scheduled through Sunday, including the community coming together at Rock Church on Thursday, according to CBS affiliate WTKR-TV. The program featured speakers and music for an opportunity to showcase the Virginia Beach’s religious and cultural diversity.

“Whether you’re Christian, you’re Jewish, you’re Muslim, you’re Buddhist, Hindu or that new breed called ‘none of the above,’ you are welcome here tonight,” said Gordon Robertson, the CEO of the Christian Broadcasting Network, according to WTKR-TV. “Look at all the people from this community that has come together to show you, the families of those who were lost in this tragedy, and show the survivors that we’re with you, that we have decided to live.”

A service was held Wednesday for Christopher Rapp in Virginia’s Stafford County. Another will be held for him Sunday in Virginia Beach.

Brent Hobbs, 61, of Virginia Beach, had worked with Nixon and attended her funeral mass to show respect to her and her family.

Hobbs said he wants to attend every service for those killed. They include 11 city employees and a contractor. But he said he doesn’t know if he’ll have the emotional bandwidth to attend all of them.

Meanwhile, police are still trying to determine a motive for the shootings. Authorities say that city employee DeWayne Craddock opened fire in the building last Friday afternoon. He was later killed in a shootout with police.