Los Angeles — Nine migrant parents who were expelled from the U.S. after being separated from their children in 2017 and 2018 set foot on American soil once again early Thursday morning in a historic, court-mandated return. Advocates hope the reunions will be the first of several reliefs granted to some of the hundreds of fathers and mothers deported to Central America without their children.

Escorted by a group of advocates, faith leaders and lawyers, the eight fathers and one mother arrived in Los Angeles International Airport in the middle of night, carrying conspicuous smiles fueled by the improbable opportunity to see their children in person for the first time in more than a year and a half.

For many of them, it was the first time in the U.S. outside the treacherous terrain of the southern border, crowded and cold Border Patrol cells and jail-like adult detention centers. It was also their second time on board an airplane; the first being when they sat on a deportation flight with their arms bound by metal shackles.

“I don’t have words to express what I feel. It’s something really big,” Fernando, a migrant father from Guatemala, told CBS News in Spanish after embracing his wife and three young daughters for the first time in about one year and eight months. “We all deserve an opportunity in life. And to all the parents who are watching us, who are separated from their children, have patience, have faith and pray a lot because miracles exist.”

Fernando, the migrant father from Guatemala, embraces his wife after returning to the U.S. for the first time since he was expelled through a deportation that a federal court found was unlawful. Camilo Montoya-Galvez / CBS News

Thursday’s unprecedented return was made possible through a court ruling issued last September by the federal judge overseeing the case surrounding the separation of migrant families by the Trump administration. Judge Dana Sabraw of the U.S. District Court in San Diego ordered officials to allow 11 migrant parents who were unlawfully deported without their children to come back to the U.S. so they could reunite with their kids and pursue their asylum cases in America.

Sabraw found that many of the parents had been given false information by officials and were, in some cases, coerced into waiving their rights and signing off on their deportation. After months of back-and-forth, the American Civil Liberties Union (ACLU) and the administration established and agreed on a mechanism for them to do so.

Over the past two years, Fernando’s family has faced great adversity. They fled Guatemala in early 2018 after Fernando’s teenage son was murdered. The family sought asylum at the U.S.-Mexico border after being forcibly separated into two groups by Mexican authorities. While his wife and two of his daughters were detained together and eventually released by U.S. officials, Fernando and his middle daughter were separated under the “zero tolerance” policy. 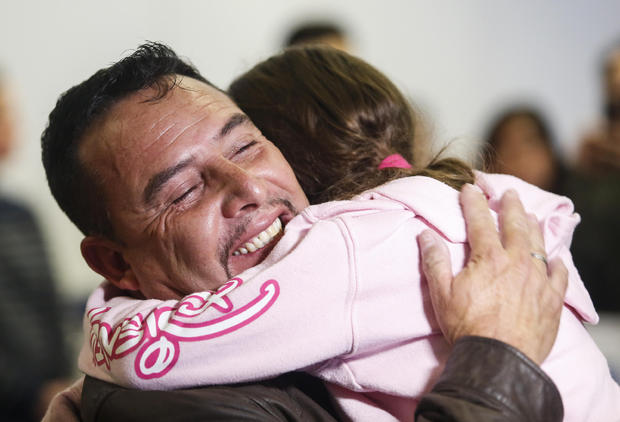 The mother and three daughters later reunited in Los Angeles, where they settled down hoping for what, up until Thursday, seemed like an unlikely possibility: Fernando’s return.

“We’ve gone through a lot of difficult situations,” Fernando said. “And I think that after all we’ve been through, we need an opportunity to be together and to fight together — which is what I want for my family.”

Fernando and the other migrant parents thanked the coalition of advocacy groups that helped them return to the U.S. Organizations and firms like Al Otro Lado, the Asylum Seeker Advocacy Project, De Anda Law Firm, Milbank LLP, Justice in Motion and the Los Angeles Archdiocese mounted what Sabraw, the federal judge in San Diego, called a “Herculean” effort to track down the nearly 500 parents who were deported without their children, provide them legal assistance and help some of them return to the U.S. on Thursday.

Unlike Fernando, most parents did not have their children waiting for them at the airport, since they have been staying with sponsors across the U.S. and in one case, at a foster home overseen by the U.S. government.

“I feel very happy that my dream has come true — not only for me but for my son,” Leticia, an indigenous Guatemalan mother, told CBS News in Spanish, tearing up as she contemplated about seeing her teenage soon. “After two years, the only thing I want is to see him and hug him.”

Leticia and her now 17-year-old son Giovanny were separated in November 2017 as part of a pilot program that the Trump administration was implementing in El Paso to test the “zero tolerance” policy of separating migrant families with children to prosecute parents for illegal entry.

“The past two years were very difficult for me because of the way they separated us. But thanks to God, we’ll be together soon — and I hope they won’t ever separate us again.”

According to court documents, Leticia endured both emotional and physical harm — including facial paralysis — as a result of her separation from her son. After six moths of being separated, the Guatemalan mother, out of desperation and under the belief that she would be reunited with her son, chose to abandon her asylum claim, a decision Sabraw said had been involuntary in his September ruling.

Leticia was ultimately removed from the country and never reunited with Giovanny — something she hopes to do in the coming weeks after asking the Department of Health and Human Services to discharge her son.

“Leticia’s son is actually the last child in government custody whose parent is eligible to reunite with him. So, as soon as Leticia settles in this week, we will be petitioning for her to reunite with her son,” Conchita Cruz, an attorney at the Asylum Seeker Advocacy Project, told CBS News.

Fernando, Leticia and the other parents were granted humanitarian parole to enter the U.S. without being detained. All of them have to check in with Immigration and Custom Enforcement (ICE) in the next 72 hours before continuing their journey to reunite with their children and families. They will all be allowed to remain in the country for the duration of the asylum cases.

Antonio, who has not seen his teenage daughter for a year and eight months, is happy to be back in the U.S. But the Guatemalan father, who is being represented by Al Otro Lado, said many other parents in Central America are still enduring prolonged family separation.

“I hope we’re not the first or the last, because there are many parents who also have their children here,” he told CBS News.

Beth Baltimore, an immigration attorney at Justice in Motion, echoed Antonio’s sentiments. Her group has been spearheading on-the-ground efforts to locate deported parents across Central America, from large cities to remote villages, who could qualify for relief under the litigation surrounding family separations.

“There are hundreds of more, we’re in touch with many of them, over 100. And we’re hoping that some may be able to have the same kind of relief that these parents were granted,” she said.

Oak Manor apartments declared a menace to safety and welfare