In a wide-ranging report, NASA’s inspector general warned that Boeing and SpaceX both face major technical challenges that threaten to delay initial flights of U.S. commercial astronaut ferry ships. If the worst-case scenario plays out, NASA could be forced to reduce its presence aboard the International Space Station to a single astronaut for an extended period, the audit said.

“Boeing and SpaceX each face significant safety and technical challenges with parachutes, propulsion and launch abort systems that need to be resolved prior to receiving NASA authorization to transport crew to the ISS,” the report concluded.

“The complexity of these issues has already caused at least a 2-year delay in both contractors’ development, testing and qualification schedules and may further delay certification of the launch vehicles by an additional year.”

Since the space shuttle’s retirement in 2011, NASA has been forced to rely on Russia’s three-seat Soyuz spacecraft to carry U.S. and partner agency astronauts to and from the space station while the agency worked to develop a new U.S. crew ship under the agency’s Commercial Crew Program, or CCP.

A Russian Soyuz spacecraft on final approach to the International Space Station. NASA

The numbers included in the inspector general’s report, released Thursday, are eye-opening.

“Since 2006, NASA has purchased 70 (Soyuz) seats worth approximately $3.9 billion, including five seats purchased through Boeing for $373.5 million,” the inspector general reported. “Overall, NASA paid an average cost per seat of $55.4 million for the 70 completed and planned missions from 2006 through 2020 with prices ranging from approximately $21.3 million to $86 million for each round trip.”

Those numbers include 12 Soyuz seats NASA has bought since 2017, at a cost of about $1 billion, in large part because of delays in the Commercial Crew Program.

While the cost of a Soyuz seat is an oft-cited statistic in favor of developing domestic spacecraft, as it turns out only SpaceX offers significantly lower costs. NASA will pay more for a seat on Boeing’s Starliner spacecraft than the agency currently pays to fly aboard a Soyuz, the inspector general said.

“As of May 2019, Boeing and SpaceX’s contracts were valued at $4.3 billion and $2.5 billion, respectively,” the inspector general said. “Of those amounts, Boeing’s costs for development and test flights were $2.2 billion, while SpaceX’s were $1.2 billion.

“For crewed missions to the ISS, NASA awarded each contractor six round-trip missions. Assuming four astronauts per flight and using publicly available information, the estimated average cost per seat is approximately $90 million for Boeing and approximately $55 million for SpaceX.”

The final currently booked Soyuz seat will be used in April by astronaut Chris Cassidy, who will join two cosmonauts aboard the Soyuz MS-16/62S spacecraft for a six-month stay in orbit. Faced with the prospect of additional commercial crew launch delays, NASA currently is negotiating for at least two additional Soyuz seats. 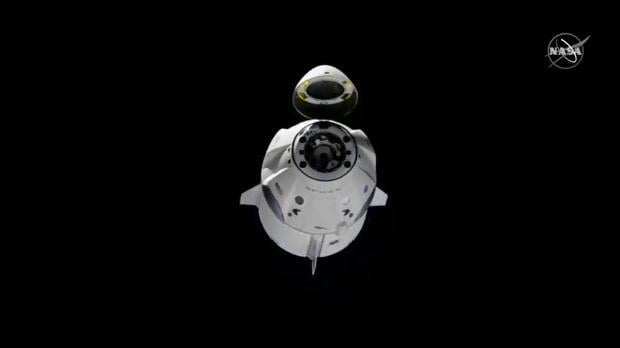 SpaceX’s Crew Dragon capsule during its departure from the space station during an unpiloted test flight in March. NASA

The issue is complicated by recent Russian decisions to reduce the number of Soyuz flights to just two per year while holding open the possibility of launching “space tourists” and other non-professionals to the space station as a commercial venture. Because it takes about three years to build a Soyuz, only a limited number of seats are available.

“NASA will likely experience a reduction in the number of USOS (U.S. Orbital Segment) crew aboard the ISS from three to one beginning in spring 2020 given schedule delays in the development of Boeing and SpaceX space flight systems coupled with a reduction in the frequency of Soyuz flights,” the inspector general reported.

“Options for addressing this potential crew reduction are limited but include purchasing additional Soyuz seats and extending the missions of USOS crew members. However, these options may not be viable given the 3-year lead time required to manufacture a Soyuz vehicle; expiration of a waiver that permitted NASA to make payments to the Russian government; and astronaut health constraints.”

In NASA’s response to the report, Ken Bowersox, then-acting chief of space operations at agency headquarters, said the inspector general “described a worst-case scenario that does not reflect NASA’s consistent efforts during the life of the program to mitigate those risks.”

“The scenario presented in the report assumes that CCP systems will be significantly delayed and that NASA will not take any future action to mitigate the impacts. … This section also does not recognize the fact that NASA is currently in discussions with Roscosmos regarding options for ensuring continuous U.S. crew on ISS.”

The Commercial Crew Program was intended from the start to restore NASA’s ability to launch astronauts from American soil aboard U.S. spacecraft. In 2014, after several preliminary competitions, Boeing was initially awarded a $4.2 billion NASA contract to build the CST-100 Starliner capsule while SpaceX received $2.6 billion to develop its Crew Dragon spacecraft.

The fixed-price contracts cover 12 operational missions, six per contractor, to carry 48 astronauts to the station by the end of 2024.

The Starliner will fly atop a United Launch Alliance Atlas 5 rocket and land in the western United States while the Crew Dragon will rely on SpaceX’s Falcon 9 rocket and return to Earth with an ocean splashdown east of Cape Canaveral, Florida.

SpaceX completed an unpiloted test flight to the space station in March and test-fired a Crew Dragon’s abort engines Wednesday in an apparently successful ground test. The company plans to launch that capsule next month for an in-flight abort test before the first piloted flight to the station in the next few months. 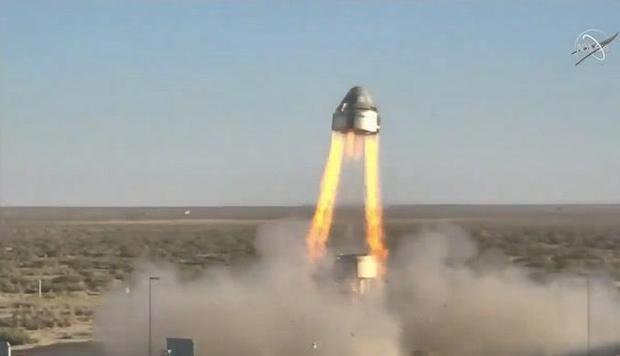 A Boeing Starliner capsule during a test of its emergency abort engines earlier this month. Boeing

Both companies have experienced issues perfecting their parachute recovery systems — one of three chutes failed to deploy during Boeing’s recent abort test — and both companies have experienced problems with their emergency propulsion systems. Development of several systems, originally expected to be tested during unpiloted flights, have been deferred to the first piloted missions.

It’s not yet clear which company will get an astronaut crew into space first, but it will depend on the results of the test flights and extensive data reviews.

“CCP schedule assessments as of June 2019 suggest final certification for Boeing and SpaceX to fly crewed missions may not occur before summer 2020,” the inspector general reported. “By this time, the Soyuz launch schedule will have decreased from two missions every six months to a single flight — a scenario that will result in a single U.S. astronaut and two Roscosmos cosmonauts on the station beginning in April 2020 barring any adjustments to current crew schedules.”

The inspector general’s report criticized NASA for allegedly overpaying Boeing by some $287 million for four planned Starliner flights during negotiations in 2016 when planners were worried about a perceived gap in launches.

While agreeing the negotiations were complex and that the report’s conclusion had the benefit of hindsight, the inspector general questioned NASA’s underlying assumptions, arguing the agency ignored other opportunities to save money and never offered SpaceX a chance to propose alternatives.

In a remarkable claim, the inspector general said according to “several NASA officials, a significant consideration for paying Boeing such a premium was to ensure the contractor continued as a second crew transportation provider.”

Boeing flatly denied that conclusion, saying in a statement the company “has made significant investments in the commercial crew program and we are fully committed to flying the CST-100 Starliner and keeping the International Space Station fully crewed and operational.”

As for how the four missions in question were priced by NASA, Bowersox emphatically denied any overpayment.

“NASA understands the OIG believes that NASA could have negotiated better prices for the (missions),” he wrote. “However, that is an opinion, three years after the fact and there is no evidence to support the conclusion that Boeing would have agreed to lower prices. Thus, NASA strongly disagrees with the OIG’s characterization that NASA ‘overpaid’ for the Boeing (missions).”