WEDNESDAY: Despite cloud coverage much of the day, highs will soar into the middle and possibly upper 70s through the day thanks to intervals of sun by afternoon. Southwest breezes will pick up to 10-20 mph as well.

THURSDAY: Scattered showers and storms are likely early in the day, likely between around 5a-10a, as a cold front moves through the region. There remains some potential for gusty winds with some of the storms, but the environment has quite a bit of limiting potential to a more organized severe weather event. Temperatures will stay in the 60s much of the day before falling late. 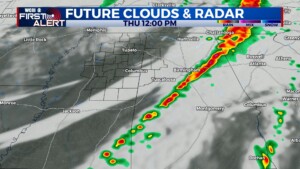 FRIDAY: The transition begins back to a colder pattern! Temperatures will start off in the 30s and only reach the upper 40s under a partly cloudy sky.

WEEKEND: Colder mornings will be the story as temperatures drop into the 20s Saturday and Sunday. Plentiful sunshine will populate the afternoon sky as highs bounce back into the 50s.

NEXT WEEK: Another unsettled week of weather looks possible as at least two storm systems are likely to impact the Southeast. Stay tuned for further updates!

End of the week sun, more rain ahead

Brighter end to week ahead of weekend rain chance