Fifty years to the day after Neil Armstrong stepped onto the surface of the moon, a NASA astronaut, an Italian flight engineer and a Russian commander geared up for launch aboard a Soyuz spacecraft Saturday on a six-hour flight to the International Space Station.

The timing of the launch was coincidental with the Apollo 11 moon landing on July 20, 1969. But Morgan said the crew was honored to serve as a symbolic link between the past, when the United States and the former Soviet Union were engaged in a Cold War space race, and today, when international cooperation is the rule and not the exception.

“I can’t think of a better way to commemorate the 50th anniversary of the Apollo moon landing than launching on the anniversary with an international crew, especially in light of NASA’s reaffirmation that we intend to land a crew on the surface of the moon in 2024,” Morgan said.

He was referring to NASA’s Artemis program, the result of a recent Trump administration directive to land the first woman and the next man on the moon’s surface four years earlier than the space agency had been planning. It’s a timeline that will require billions in additional funding if it is to have any chance of success.

Hoping for the best, NASA is charging ahead and NASA Administrator Jim Bridenstine “made it very clear that when we pursue that, we will be (going) as an international crew,” Morgan continued. “It’s an interesting contrast to the landing 50 years ago and a great way to commemorate it.”

The Soyuz MS-13/59S crew poses for a selfie with their Soyuz rocket before its rollout to the pad for launch Saturday. From left: NASA physician-astronaut Drew Morgan, Soyuz commander Alexander Skvortsov and Italian flight engineer Luca Parmitano. NASA

Armstrong and Buzz Aldrin, leaving crewmate Mike Collins behind in lunar orbit, landed on the moon at 4:18 p.m. EDT on July 20, 1969. That 50-year milestone will occur as the Soyuz MS-13/59S crew closes in on the International Space Station just a few hours after launch.

Takeoff was timed to permit the spacecraft to climb directly into the plane of the space station’s orbit, a requirement for rendezvous missions. At liftoff, the lab complex was expected to be flying 254 miles above the border between Kazakhstan and Mongolia, 646 miles downrange from the launch pad.

In the eight minutes and 45 seconds it will take the Soyuz spacecraft to climb into that orbital plane, the station, moving at nearly five miles per second, will have increased its lead to 2,436 miles.

But over the next six hours, the Soyuz crew will carry out a series of rocket firings to catch up with the quarry, moving in for docking at the aft end of the Russian Zvezda module at 6:51 p.m. as the two spacecraft pass over central Asia.

Standing by to welcome them aboard will be Expedition 60 commander Alexey Ovchinin and NASA flight engineers Nick Hague and Christina Koch. They were launched to the station on March 14 aboard the Soyuz MS-12/58S spacecraft and have been alone aboard the lab since June 24 when three other crew members returned to Earth.

Their new crewmates bring a wealth of experience to the station. Skvortsov is a veteran of two previous stays aboard the lab while Parmitano completed a long duration flight in 2013, coping with a harrowing spacewalk emergency. Morgan, an Army colonel making his first space flight, is an accomplished physician with extensive special operations experience. 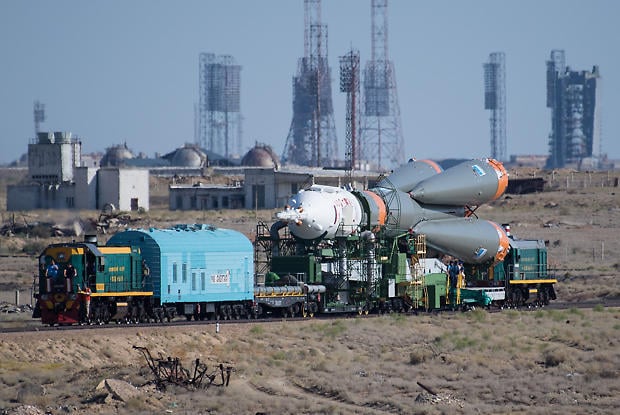 The Soyuz MS-13/59S spacecraft is hauled to the launch pad at the Baikonur Cosmodrome in Kazakhstan.  NASA

After a short video chat with friends and family back at Baikonur, along with a mandatory safety briefing, Skvortsov and company will settle in and perhaps mark the moment, at 10:56 p.m. on Saturday, when Armstrong stepped onto the Sea of Tranquillity 50 years ago.

“The moon mission and the moon landing, the first steps of a human being on the surface of the moon, are so important,” Skvortsov said before launch. “They are in the memory and in the hearts of every person on Earth. Such significant events demonstrate how important it is to go forward. I hope we keep going forward.”

The expanded six-member station crew faces an extremely busy summer and fall in space, with multiple spacewalks, the arrival and departure of multiple visiting vehicles and a full slate of scientific research.

After the arrival of a SpaceX Dragon cargo ship late next week and a Russian Progress freighter on July 31, the crew will welcome an unpiloted Soyuz on Aug. 24. The MS-14/60S spacecraft is being launched atop an upgraded Soyuz 2.1a booster on a test flight intended to clear the rocket for piloted launches next year.

One month later, on Sept. 25, yet another Soyuz will be launched, this one carrying MS-15/61S commander Oleg Skripochka, NASA Flight engineer Jessica Meir and United Arab Emirates guest cosmonaut Hazzaa Ali Almansoori. He will be the first non-professional flier, or “spaceflight participant,” to visit the station since Cirque du Soleil co-founder Guy Laliberté completed the 10th such stay in 2009.

NASA is preparing for commercial visitors of its own under a program to encourage private-sector utilization of the spacelab. A placeholder for the first potential “private astronaut mission” shows up on NASA’s international space station traffic chart in October 2020 with a second PAM flight in March 2021.

But those missions will depend on the successful testing and operational use of commercial crew ships being built by Boeing and SpaceX and it’s too soon to say when the launch of a U.S. private astronaut mission might actually occur.