Sandy Springs, Georgia — Dekalb County Police Sergeant Frank Cusimano and his K-9 partner, D’Jango, responded to a call on Tuesday that would change everything. “This guy did his job valiantly and because of him he saved lives,” Cusimano said.

Cusimano and D’Jango were pursuing a man with numerous felony warrants when police said the man fled and fired his gun, striking D’Jango. He was rushed to Blue Pearl Specialty and Emergency Pet Hospital for emergency surgery. Dr. Kevin Winker operated on D’Jango, whose leg had been fractured by the bullet.

“It’s no different than it is in trauma surgery on the human side. Give them a chance to survive,” Winker said.

D’Jango underwent two surgeries, but veterinarians determined his leg couldn’t be saved. Cusimano said he wondered if D’Jango would make it.

Police departments from the area kept vigil for D’Jango at the hospital, sitting outside his kennel and in the hallway 24 hours a day, just like they do for injured human officers. Because of his injuries, D’Jango will likely be retired from service.

On Saturday, he went home with Cusimano, just like he did every night before. Only when he tried to jump in the back of the police vehicle, he needed a little help from his partner. 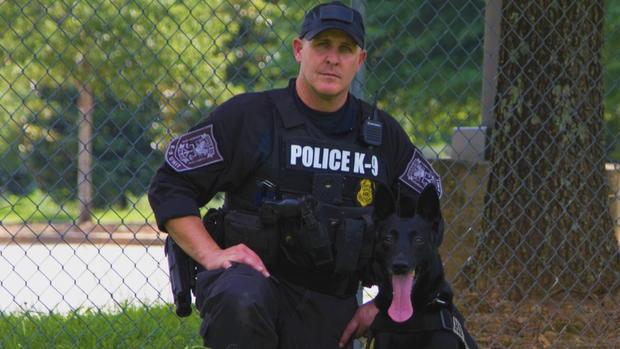