John Moore said he knew he was taking “an important image” when he captured a little girl in tears but that he “could never have expected that it would have had this level of impact.”

The image shows a 2-year-old Honduran girl crying while her mother is searched and detained, and has become a visual centerpiece in the heated debate over U.S. policy on immigration and family separations. And this week, it was used to create the cover for the July 2 issue of TIME.

Moore said he captured the photograph while on an official ride-along with U.S. Border Patrol and that he was “overcome with sadness” when he took it.

On TIME magazine’s cover, the portion of the picture showing the little girl is isolated to create an illustration. She is seen looking up to President Trump, who is looking down in her direction. The cover features three words of text: “Welcome to America.”

How does the photographer feel about the use of his image by TIME? Moore said he is glad the picture is bringing attention to the story “whether it’s in TIME or any other publication.”

Moore, who is a Getty Images special correspondent and senior staff reporter and was interviewed by TIME, did note the importance of the preserving the integrity of the original photo. “Any photojournalist would prefer that a still photo remain as a documentary photo and not part of an illustration. However, I understand their need to try and broaden the story. And so on one hand, I always prefer a photograph to be used with its normal integrity. But on the other, I don’t take great exception to them doing an illustration,” he said. 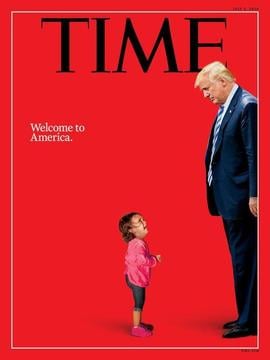 Moore also said  he is “pleased that this image has touched so many people’s hearts.”

“I’ve worked in this business for many years and oftentimes we cover stories that we think are really important but in the end they may not resonate with the public,” said Moore. “This image seems to have touched people profoundly and in fact it’s a very emotional photograph for me as well.”

“For ten years covering immigration issues I’ve tried to humanize a story which is sometimes conveyed by some in the media in very statistical terms, and making photographs, or taking photographs, that make people feel is one way to humanize this issue,” he said. “And I think if everyone involved in this debate sees each other as human beings worthy of respect, ultimately we can find humane solutions.”