THURSDAY: Expect partly cloudy skies with a slight chance of rain in the afternoon. The greatest chances of rain remain south of I-20, however an isolated shower is not out of question. We’ll reach a high temp near 91 today. 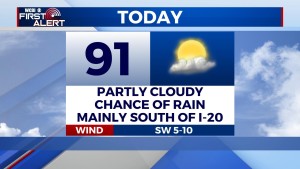 FRIDAY: Drier conditions begin to ease back into the forecast with high temperatures landing near 93. A mix of sunshine and clouds will rule overhead though we expect to stay dry with a 10% chance of an afternoon pop-up shower.

THIS WEEKEND: Saturday is the same story as Friday although we’ll begin to see increased rain chances due to next week’s weather set up. Sunday, rain and storm chances return to the forecast with temps reaching the low 90s during the day and low 70s at night.

NEXT WEEK: We’ll kick off the second week of August with increased rain and storm chances credited to low pressure and Gulf moisture. Daytime highs will range through the upper 80s to low 90s with lows resting in the low 70s.

A Tupelo man is charged with possession of cocaine and marijuana

Four inmates who escaped an Alcorn co. jail are back in custody

Rain and Storms Likely Through Next Week