COLUMBUS, Mississippi (WCBI) – After several dry, calm weeks, rain and storm chances are back in the forecast Wednesday.

OVERNIGHT: Clouds will increase, and some scattered rain will likely break out toward daybreak across the region as moisture returns.

WEDNESDAY: Morning showers will gradually shift into Alabama, but some lingering rain is possible for the Golden Triangle into west Alabama into the early afternoon. Eventually, everyone will catch a break in the rain as we wait for additional storms to form. Highs will be split – holding in the 70s where rain persists longer, 80s that see some clearing (such as Natchez Trace Pkwy northwest).

WEDNESDAY NIGHT: Scattered storms are forecast to develop over Arkansas in the afternoon hours. They should then shift toward north & central MS after sunset. Despite unfavorable timing, moisture & instability actually look fairly impressive and could sustain some degree of a severe threat. Some storms may grow strong enough for wind and hail, and there’s a non-zero risk of a tornado. The main time frame to watch is from roughly 6p to midnight. 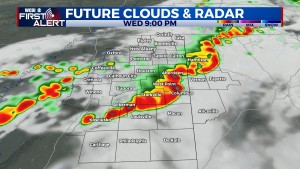 WEEKEND: Warmer, more humid air looks to return yet again ahead of the next front. Showers and storms could move back in Sunday, so stay tuned!