Gervais, who hosted the show for the fifth time, warned the audience before ripping them on stage for the 77th annual Golden Globes. “Let’s have a laugh at your expense,” he said. “Remember they’re just jokes. We’re all gonna die soon and there’s no sequel, so remember that.”

He called out the stars in attendance for being friends with Epstein, a convicted sex offender and a wealthy financier with powerful friends who authorities say killed himself in a New York City jail. “I know he’s your friend but I don’t care,” he said. “You had to make your own way here in your own plane, didn’t you?”

Gervais criticized Hollywood figures for being vocal with the causes they advocate for, but turning a blind eye to the companies that pay them.

“Apple roared into the TV game with ‘The Morning Show,’ a superb drama about the importance of dignity and doing the right thing, made by a company that runs sweatshops in China,” he said, with Apple CEO Tim Cook in attendance.  “Well, you say you’re woke but the companies you work for in China — unbelievable. Apple, Amazon, Disney. If ISIS started a streaming service you’d call your agent, wouldn’t you?”

Before concluding his monologue, he urged stars to not make a “political speech” when accepting an award. “You’re in no position to lecture the public about anything,” he said. “You know nothing about the real world. Most of you spent less time in school than Greta Thunberg.”

Gervais also went after actress Felicity Huffman, who was among the parents who pleaded in the college admissions scandal and served two weeks in prison for paying $15,000 to have a test proctor correct her daughter’s SAT answers.

“But you came here in your limos. I came here in a limo tonight and the license plate was made by Felicity Huffman,” he said. “It’s her daughter I feel sorry for. OK? That must be the most embarrassing thing that’s ever happened to her. And her dad was in ‘Wild Hogs.'”

Following his blistering performance, which received both praise and criticism, Gervais thanked everyone on Twitter and appeared to take a subtle dig at the tensions between Iran and President Trump.

“Thanks for all your amazing comments about my Golden Globes monologue,” he tweeted. “Best reaction ever and that means a lot to me… Make Jokes, Not War.”

Films such as “1917” and “Once Upon a Time in Hollywood” were winners for some of the top categories Sunday. Here’s the full list of nominees and winners. 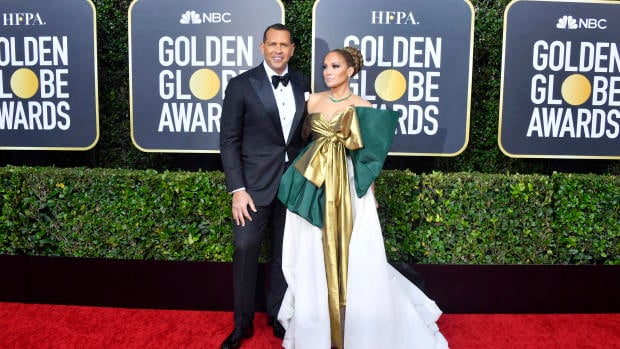