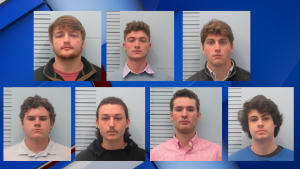 According to the university’s newspaper, The Oxford Police Department charged members of the Gamma Iota chapter of Pi Kappa Alpha fraternity with felony cyberstalking after being accused of harassing a former Pike member.

The hazing victim filed the report in 2020.

The fraternity will be suspended until November of 2025.

Each suspect was taken to the Lafayette County Detention Center on a $5,000 bond.