COLUMBUS, Mississippi (WCBI) – SUMMARY: A stray shower is possible today, but most of us will be dry. More widespread rain & storms will move through Tuesday and Wednesday.

MONDAY: Mostly cloudy. High near 79 degrees. A stray shower or two is possible, but widespread rainfall is not expected. Chance of rain: 20%.

TUESDAY: Showers and thunderstorms are likely. Rain may be heavy at times. High near 82 degrees. Windy at times. Chance of rain: 60%. Here’s what the radar might look like at 3 PM Tuesday: 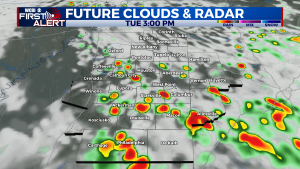 WEDNESDAY: Much like Tuesday. Showers and thunderstorms likely. Rain may be heavy at times. High near 82 degrees. Windy at times. Chance of rain: 60%.

REST OF THE WEEK: Scattered thunderstorms are possible on Thursday, but coverage is expected to be less widespread. Friday will be our next completely dry and sunny day! After that, the weekend also looks beautiful! As far as temperatures go, afternoon highs will generally be in the low 80s, except for Thursday, where we’ll stay in the upper 70s. Overnight lows will range from near 70 Tuesday, to the upper 50s Friday. Have a great week! 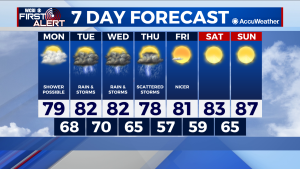