The letters between poet T.S. Eliot and a woman long-believed to be his muse, Emily Hale, were made public this week, 50 years after her death. The letters reveal an intimate relationship between the two, although Eliot left a statement to be released upon the unveiling of the letters that said, “Emily Hale would have killed the poet in me.”

Eliot and Hale exchanged letters starting in the early 1930s until his second marriage in 1957. The two met in 1912, according to Eliot’s statement. Letters from the early 1930s — contained in the first of 14 boxes — show Eliot confessing his love for her, according to The Associated Press.

“They are extremely passionate,” said Eliot scholar Frances Dickey, who was among the first people to see the letters. “It’s really more than what I expected. They are very emotional, claiming that she inspired a lot of his poetry. She obviously played a really important role in his poetic life.”

Eliot’s copies of his letters were destroyed by a colleague at his request. Hale donated her letters to Princeton University, to be unsealed 50 years after they both died  —  Eliot died in 1965, and Hale in 1969. The 1,100 letters were first taken out of the wooden boxes that housed them in October, and were made available for public viewing on Thursday.

Emily Hale and T.S. Eliot pose in a 1946 family photo in Dorset, Vermont. After more than 60 years of sitting sealed up in a storage facility at Princeton University Library, about 1,000 letters written by poet T.S. Eliot to confidante Emily Hale will be unveiled, revealing the extent of their relationship that scholars have speculated about for decades.  Princeton University Library via AP

There are still hundreds to be read.

“You have made me perfectly happy: that is, happier than I have ever been in my life,” Eliot wrote in one of the letters, according to The Guardian. “I tried to pretend that my love for you was dead, though I could only do so by pretending myself that my heart was dead.”

Eliot said in his statement that he believed he told Hale he loved her before he left for Germany and France in 1914. But, in 1915, he married a woman named Vivienne Haigh-Wood, who suffered from mental illness. Eliot and Haigh-Wood separated in 1933. Hale and Eliot reconnected when he visited California in the early 1930s.

Eliot said he realized later his marriage brought “the state of mind out of which came The Waste Land” and “it saved me from marrying Emily Hale.”

“Emily Hale would have killed the poet in me; Vivienne nearly was the death of me, but she kept the poet alive,” Eliot said. “In retrospect, the nightmare agony of my seventeen years with Vivienne seems to me preferable to the dull misery of the mediocre teacher of philosophy which would have been the alternative.”

Despite the intimacy of the letters, Eliot said in his statement that as time went on, he realized “more and more how little Emily Hale and I had in common.” Further, he writes, “I never at any time had any sexual relations with Emily Hale.”

“I had already observed that she was not a lover of poetry, certainly that she was not much interested in my poetry; I had already been worried by what seemed to me evidence of insensitiveness and bad taste,” he wrote. “It may be too harsh, to think that what she liked was my reputation rather than my work.”

Eliot scholar Anthony Cuda told the AP that was a “cold and untrue statement.”

“He pursued her,” he said. “His earliest letters were ardent declarations of love. It’s not as if she chased after him.”

After his first wife’s death in 1947, Eliot said he began to realize he no longer loved Hale. “I came to see that my love for Emily was the love of a ghost for a ghost, and that the letters I had been writing to her were the letters of an hallucinated man, a man vainly trying to pretend to himself that he was the same man that he had been in 1914,” Eliot said.

Michael Wood, an emeritus professor of English at Princeton, who was present when the letters were unsealed in October, told The New York Times it was a “big surprise” that Eliot was “so angry.”

“I don’t know what he’s trying to do,” Wood said. “He’s trying to tell a story that he thinks would correct the story the letters would tell on their own. He seems to have rewritten the whole relationship with Emily.” 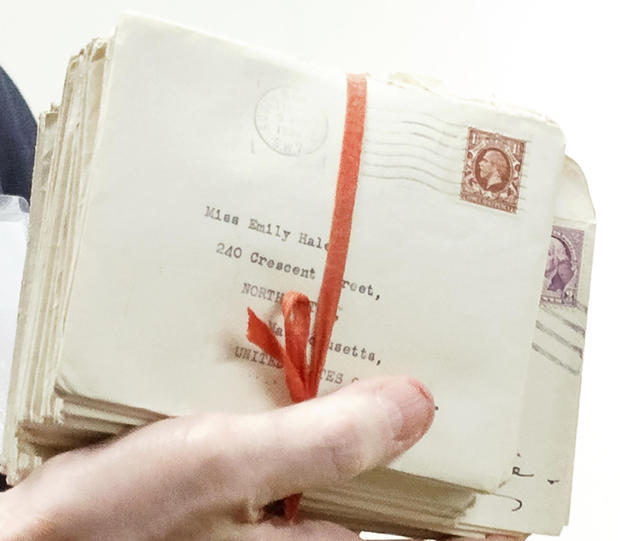 In this Oct. 14, 2019, photo, letters between poet T.S. Eliot and longtime confidante Emily Hale are displayed in Princeton, N.J. Thursday, Jan. 2, 2020 marks the first day that students, researchers and scholars can go to the Ivy League school in New Jersey to see these letters that many are saying may reveal more intimate details about Eliot’s life and work.  Shelley Szwast/Princeton University Library via AP

Cuda said Eliot wrote the harsh statement because he feared the embargo would be broken.

“He was looking back on this and felt embarrassed and ashamed at the openness and vulnerability he allowed to come through at the time,” Cuda said. “He tried to do damage control.”

Cuda said Eliot also wanted to protect his second wife, Valerie, who he said “transformed” the world for him.

“But it’s a strange protectiveness,” Cuda said. “He was so devoted to Valerie and she to him. What the Emily Hale letters reveal – (Valerie) wasn’t the unique love of his life. He had a unique and tense experience before her.”

The letters also reveal other private details of Eliot’s life, including his craving for alcohol.

Cuda said the letters are “all we could have hoped for.”