The philosophy behind charcuterie restaurant Cured

Inside Cured, Chef Steve McHugh’s San Antonio restaurant, diners are greeted by a massive humidity-controlled meat locker known as the “Charc Tank.” The charcuterie inside is McHugh’s signature dish – and it reflects his philosophy of honoring the farmers whose livestock it depends on.

“We made a commitment early on that we were gonna purchase entire animals, and then from there figure out what the heck we were gonna do with it,” McHugh said. He said the Charc Tank appeals to about 95% of his consumer base.

“Sometimes people walk in and go, ‘I didn’t need to see that,'” he said with a laugh. “But, we weren’t going to hide it in the back, this is what you get. This is what it is.”

The tank is filled with various meats and salamis in different stages of curing, or salting. The length of the curing process is determined by size — but McHugh says one ham can take about two years.

“We’re definitely not trying to weird people out. We’re not trying to freak them out,” he said. “This is stuff people [have] been doing for centuries. It’s ‘come in, have a good time, enjoy some cured meats.'”

If McHugh seems comfortable with a farm-to-table approach, it’s because he grew up that way. His parents, both working professionals, raised their seven boys on a dairy farm in Wisconsin.

“I really, in a lotta ways, think they bought it to keep us out of trouble,” he said. “But at the same time, it was a way for them to provide food to said family.”

McHugh worked as a short order cook in high school, but went to college on a scholarship to study the saxophone.

After graduating from the Culinary Institute of America, McHugh improvised his way to New Orleans. “New Orleans was amazing because it was like going to another country, you know, in the mid-’90s,” he said. “It felt like I’d left the United States and was in a totally different place.”

He spent 14 years working for some of the biggest restaurateurs in the Big Easy. Then, he was asked to help open a restaurant in San Antonio – and that’s when everything changed.

In 2009, McHugh didn’t know he was living with non-Hodgkin’s lymphoma. “I was, you know, leaving sick every day, and just cutting out, and telling my general manager, ‘I’ll be back tomorrow. I’ve just gotta get some sleep,'” he said. “I went to probably three or four different doctors, and, you know, I got, ‘You have the flu.'”

It was an allergist who suggested the CT scan that revealed a baseball-sized tumor in his chest. But McHugh and his wife Sylvia were determined not to let it stop them.

“It was just somebody in my oncologist’s office there in New Orleans, one of the nurses said, ‘You know, nobody told you to stop living your life,'” he recalled. “And that was the moment where I said, ‘You’re right. We’re gonna move to San Antonio, and we’re gonna go open that restaurant, and we’re gonna, you know, continue to live life the way we’d planned it.'” 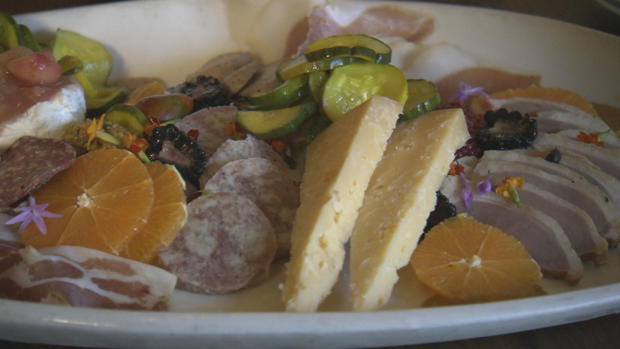 After he was cured of the cancer, he had a smaller problem to solve: naming his very own restaurant.

“We just could not figure it out. But we knew it was important,” he said. “We really wanted it to have meaning.” To that end, he hired a branding company to help. Immediately after listening to his story, McHugh said, the company came up with Cured.

Since opening in 2013, Cured has been a James Beard Award finalist four times, including the past three years. He’s currently working on a cookbook – and he’s hoping that this time, a name will come more easily.