For many, American whiskey means bourbon, a spirit made mostly from corn. But a growing number of connoisseurs are turning back the clock, and reviving rye whiskey, a spicier drink that traces its roots to the earliest days of the republic.

The original rise of rye coincides with the rise of America, reports “CBS This Morning: Saturday” co-host Jeff Glor. It was a spirit born out of a rebellion against British rule.

Britain’s empire in the 1700s was fueled in part by the production – and taxation – of rum … until the Revolution.

“Back in the Colonial days, rum ruled,” said Ryan Ciuchta, the head blender at King’s County Distillery in Brooklyn. When it opened a decade ago, it became the first distillery to open in New York City since Prohibition.

“Once we had that separation from the British, all things British went out of fashion, rum being one of them,” he said.

And that was when America really stamped itself with rye.

Americans in those early days of the republic drank a lot. The average American consumed almost 2 bottles of spirits a week, and there were an estimated 14,000 to 20,000 distilleries operating in the U.S.

Even our first president, George Washington, got in the game, at one point becoming the largest distiller of rye whiskey in the country.

Rye was dominant for more than a century; it wasn’t until Prohibition that distilling in the rye-rich Northeast dried up.

“World War I, post-World War I into Prohibition, rye whiskey started to fall out of favor,” said Allen Katz, the co-founder of the New York Distilling Company and an expert on American cocktail culture.

“Really post-World War II, in a classic sense of ‘marketing rules all,’ bourbon became the preferred spirit for a cultured set of people, and rye whisky was perhaps thought of as a little bit more blue collar. And it wasn’t the cocktail sensibility of the 19th century anymore.”

Rye continued to sit in the cellar of America’s alcohol appetite for more than five decades. In 2009 revenue from rye in the U.S. totaled about $15 million. 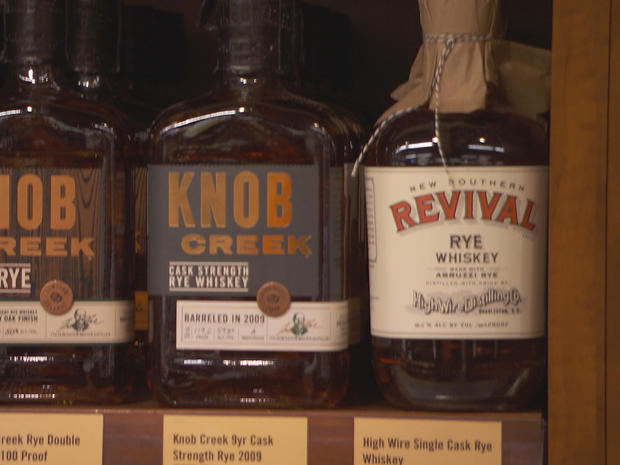 “In the last 10 years, you’ve seen rye jump 1,098 percent,” said Clay Risen, who has written two books about whiskey; his third will be exclusively on rye.

So, why is rye returning so strongly?

“The first thing is really the success of bartender culture in driving consumer tastes,” said Risen. “So early on, you saw a lot of bartenders going back to pre-Prohibition recipes, finding a lot of things that were rye-driven. And consumers jumped at it. So, that was one thing. And then I think the other is that there’s a lot of curiosity out there these days. People want to try different whiskeys. There’s no brand loyalty, there’s no style loyalty. So, something like rye comes along and people say, ‘Oh, that sounds great. I want to try something new.'”

“We are really in the platinum age of American cocktail culture,” Katz said, “coast to coast and everywhere in-between, because people are taking the time to pay attention to their ingredients and how they’re using them in mixed drinks.”

Glor asked Risen, “If people are reluctant to try rye or intimidated when they hear about it, what do you say?”

“First of all, what I recommend is that they go for something that’s what you call a relatively low rye,” he replied. “So, something like Jim Beam basic rye, something like Wild Turkey. I also recommend that people try it in a drink first.”

Producers like Katz and Ciutchta believe rye is in the process of reclaiming its rightful place as America’s historic spirit.

Glor asked, “Has any spirit had the roller coaster ride that rye has?”

“I’m not sure,” said Ciuchta. “That’s a great analogy for it. And I hope that that coaster is seemingly rising and is never gonna fall again!”