LEE COUNTY, MISS. (WCBI) – Three people are behind bars, charged with capital murder in connection with the December shooting death of a Lee County man.

28-year-old Gavin Jeffers of West Point, 21-year-old Christopher Clayton of Fulton, and 29-year-old Shanery Hampton of Macon are charged in connection with the murder of Justin Mayfield. 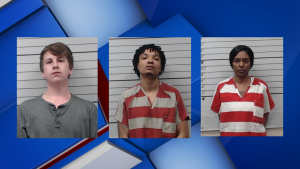 On December 22nd, Lee County Sheriff’s deputies responded to a house on County Road 746. They found Mayfield in the bathtub, with gunshot wounds.

“They knew the contents inside this home, much of the contents I’d already mentioned, we seized part of it when we left, to tell you that lifestyle, sometimes the end result is not good. But we don’t want the general public to think we have someone out here randomly breaking into homes and shooting people who have no idea of what’s going on,” said Sheriff Johnson.

Sheriff Johnson says Jeffers also has ties to Chicago, where he has convictions for aggravated kidnapping, home invasion, carjacking, aggravated robbery, and burglary. The sheriff says more arrests are expected.