LEE COUNTY, Miss. (WCBI)- Two people are in jail after a drug bust unfolded during a traffic stop.  Deputies pulled over a vehicle on Highway 371 with 58-year-old Robert Cayson and 21-year-old Amberly Hatch inside.

Investigators found marijuana, a marijuana grinder, two bongs, a glass pipe, oxycodone, and a small mirror with a white powdery residue inside the vehicle. Both suspects were taken to the Lee County Jail and law enforcement found methamphetamine on Cayson. Cayson already had an open warrant for petit larceny during the stop.

Cayson and Hatch are facing controlled substance and paraphernalia-related charges. 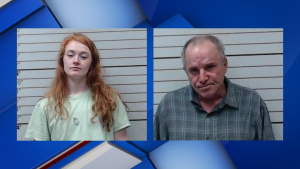